Earlier Tonight, an Atheist Delivered an Invocation in Greece, NY, the Center of the Supreme Court’s Ruling July 15, 2014 Hemant Mehta

Earlier Tonight, an Atheist Delivered an Invocation in Greece, NY, the Center of the Supreme Court’s Ruling

Earlier tonight, Dan Courtney of the Atheist Community of Rochester delivered an invocation at the Greece (New York) Town Board meeting, making him the first atheist to do so at the focal point of this spring’s Supreme Court ruling.

In case you need a refresher, from 1999 through 2007, Christians delivered every single invocation prayer at the Greece Town Board meetings. They weren’t prayers to a generic “God” either — they were specifically praying to Jesus Christ and the God of Christianity.

Even after town residents Susan Galloway and Linda Stephens spoke out against the practice, the board only went with a non-Christian invocation-giver at four of its next twelve meetings… before going back to their preferred Christian prayers.

As everyone knows by now, Stephens and Galloway sued the board over this and took their case to the Supreme Court, where a 5-4 majority ruled against them, setting the stage for government meetings everywhere to open with sectarian prayers at the speaker’s discretion.

The silver lining to the case was that atheists weren’t excluded from giving those invocations (and no city could reject them). They could even give openly non-religious speeches if they wanted, though, so far, we’ve only seen atheists give remarks that are inclusive of everybody (which is the better route, anyway).

Enter Dan Courtney, who was among the first people to sign up to deliver an invocation after the Supreme Court’s decision. It took more than two months from then until now, but it finally happened — and Stephens and Galloway were there to witness it.

According to the Center For Inquiry’s Debbie Goddard, who was on location tonight, the invocation was preceded by the Pledge of Allegiance, officially called a “Moment of Prayer”, and followed by a moment of silence:

It seems they also messed up his group affiliation.

There didn’t appear to be many protesters. Mostly this guy: 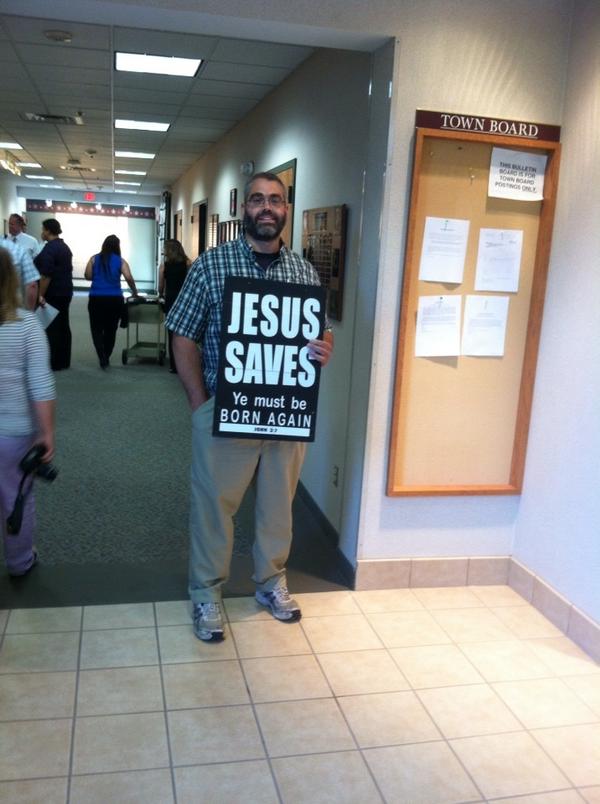 According to reporter Meaghan McDermott, a large portion of the crowd began to walk out of the meeting after Courtney was done speaking, interrupting the moment of silence.

Here’s the transcript of his invocation courtesy of McDermott and Carolyn Becker of Openly Secular as well as the audio:

Thank you, members of the town board. Thank you, Supervisor Rielich, for allowing me to offer the invocation.

Freethinkers, atheists, non-believers, whatever label you wish, this group comprises a significant part of our population. I am honored to be providing an invocation on their behalf, and on behalf of all the citizens of the town of Greece.

On July 4th, 1776, the 56 men who pledged their lives to the document that changed the course of history, agreed to the central tenet that, “Governments are instituted among Men, deriving their just powers from the consent of the governed.”

More than 238 years later, the central premise still echoes, however faintly, from the town hall to the white columned halls of Washington. Yet this premise, this foundation necessary for a free and flourishing society, is today, more than ever, under assault. This central pillar of a free society; this notion that is deeply heretical to authoritarian culture, proclaims that it is from the people that moral authority is derived. It is that within us, the citizens, that knowledge and wisdom must emerge.

The preservation of this premise does not come from accepting the status quo, but by asserting our rights and exercising our duties. That this premise still endures testifies to its truth, and we can say with confidence that it is in seeking the counsel of our conscience that we find the beginning of wisdom. It is in the exercise of our duty as citizens that we find the beginning of knowledge.

We, as citizens, the beginning and the end, the alpha and the omega of our destiny, are not, as the great philosopher Immanuel Kant warned, mere means to the ends of another, but we are ends in ourselves.

This basic premise, this profound idea, guides us such that we need not kneel to any king, and we need not bow to any tyrant.

So I ask all officials present here, as guarantors of our Founders’ revolutionary proclamation, to heed the counsel of the governed, to seek the wisdom of all citizens, and to honor the enlightened wisdom and the profound courage of those 56 brave men.