I happened to graduate from a school that’s notorious for being exempt from Title IX, the law that says schools receiving federal funding can’t discriminate on the basis of gender. After the rash of rape-related Title IX rights violations over the past few years, I tend to keep my eyes open for instances where Christian colleges are using exemptions from the nines to practice hypocritical Christianity and bigotry on their campuses. 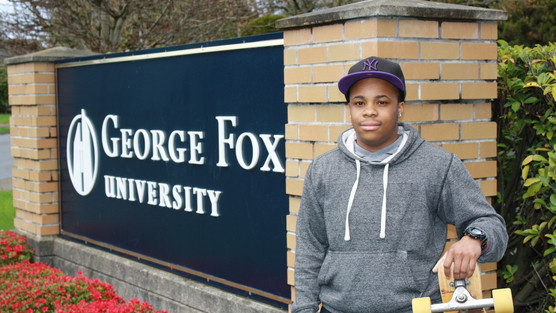 The latest of these violations in the guise of religious freedom is taking place at George Fox University in Portland, Oregon. Jayce Marcus (above), a fully transitioned transgender man, has been in a battle with the school for equal access to male housing. The school showed its desperation to remain inhospitable to LGBTQ individuals through a hush-hush, rush application for a religious exemption from Title IX from the Department of Education. Simply put, they didn’t want to allow someone they still believe is female to live with men.

“George Fox University… without telling us, requested a religious exemption to the Title IX regulations regarding housing, restrooms and athletics as they apply to transgender students… GFU requested this exemption from the U.S. Department of Education (ED) a mere three days before denying Jayce’s final appeal to the university and a mere four days before Jayce filed his complaint with the ED. The ED granted the request for the religious exemption with surprising speed — only two months, rather than the years it has taken historically to get an exemption. Based on the exemption, the ED closed Jayce’s complaint. The ED did all of this without telling us anything about the exemption request, despite my repeated calls and emails for information and status updates. After I received their letter, a representative from ED told me he was ‘not authorized’ to discuss the religious exemption with me. Normally, the ED decides whether to investigate a complaint within 30 days. In Jayce’s case, they made us wait about 90 days, all without telling us the real reason they were making us wait. We are going to appeal the ED’s ruling.”

Jayce will be forced to continue to live off campus and use the women’s facilities at his school, even though they are no longer appropriate for him. Transgender people are already at an incredibly high risk for violence in the U.S. By living off campus, Jayce’s safety may be even more compromised than if he were living on campus, especially now that his case has been covered in so much of the local media.

Jayce and Southwick are particularly frustrated by the fact that this means George Fox will still be allowed to receive taxpayer funding while under the religious exemption (which is very abnormal).

“To my knowledge, this is the first Christian college to ask the federal government for a permission slip to discriminate against transgender students,” Southwick says. “This is worse than Hobby Lobby because George Fox is largely funded by taxpayer money. While the government may have granted George Fox an exemption for the time being, private companies do not need to tolerate this discriminatory behavior. Nike, whose logo is on George Fox’s athletic gear, and Intel and Starbucks, who are major employers of George Fox graduates, can let the university know how they feel about the university’s discriminatory actions.”

I have several friends who are students at or alumni of George Fox, and they are discouraged by the choices made by the university leadership. Caitlin Kellogg (of the ever-delightful Hogwarts Seminary Tumblr) and current seminary student at GFU urged people (in an email to me) to sign a petition regarding the injustice of Jayce’s situation:

As a master’s of theology student at George Fox Seminary, I am deeply disappointed and disgusted by their decision to secretly request a religious exemption from Title IX. The more I’ve studied the Bible, the more I come to understand the heart of justice, and the call to partake in bringing heaven on earth. As Christians, we are called to care for the marginalized, the voiceless, to love our neighbors, and to love our enemies. Just as Jesus showed us. Where is there love in religious exemption? They are protecting their own power and position, while maintaining the lie that they are “loving” Jayce. That is not love, that is manipulation, hypocrisy, and abuse. The University’s decision does not align to Bible I know, nor the Jesus they claim to follow.

July 14, 2014
This Church Teaches Evolution Classes Over the Summer, and Creationist Ken Ham is Furious
Next Post

July 14, 2014 A Catholic Doctor in Poland Refused to Perform or Facilitate an Abortion, so Warsaw's Mayor Fired Him
Browse Our Archives
What Are Your Thoughts?leave a comment