Last April, Crystal Moore (below) was fired as the police chief of Latta, South Carolina. It happened without warning. Mayor Earl Bullard claimed she was dismissed because of “sheer insubordination,” though Moore felt her status as an out lesbian had something to do with it. She had a point: In her nearly 20 years of service to the town, she hadn’t been reprimanded once. 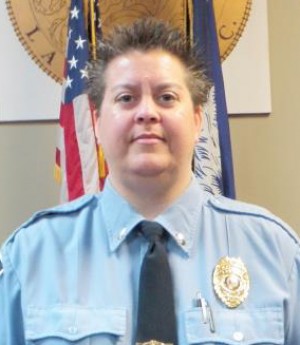 Town Councilman Jarett Taylor thought she had a point, too. So he began recording his conversations with the mayor — something that’s legal to do in the state — in part because he knew the mayor had a reputation for lying. What he got on tape was just incredible:

I would much rather have — and I will say this to anybody’s face — I would much rather have somebody who drank and drank too much taking care of my child than I had somebody whose lifestyle is questionable around children. Because that ain’t the damn way that it’s supposed to be. You’ve got people out there that ­– I’m telling you, buddy, I don’t agree with some of the lifestyles that I see portrayed, and I don’t say anything because that’s the way they want to live. But I’m not gonna let my child be around it. I’m not gonna let two women stand up there and hold hands and let my child be aware of it. And I’m not gonna see them do it with two men neither. I’m not gonna do it, because that ain’t the way the world works.

That’s the sort of anti-gay bigotry you typically hear from Religious Right leaders, not elected officials. And how did Bullard get elected mayor when he apparently can’t string together enough words to tell a five-year-old, “That child has two mommies because they love each other”?

But here’s the brilliant thing. Even though South Carolina isn’t known for its support of LGBT rights — an amendment to ban gay marriage was passed by voters nearly a decade ago — the people of Latta overwhelmingly came to Moore’s defense. Not only that; they voted to strip the mayor of his powers:

Within days of Moore’s firing, the town council passed a vote of confidence in her, demanding the mayor hire her back. They also set up an election that would strip the mayor of his power.

Moore, who played softball at Latta High School, walked up and down the streets for days before the vote, explaining her side of the story and calling for change. Last month, 69 percent of 475 voters approved of taking the mayor’s power away…

“Crystal is a good chief and she loves this town,” said Taylor, the councilman. “It made me proud of my town to see everybody come out for her the way they did.”

How amazing is that? Despite the support, Moore still has about $20,000 in legal fees to pay from her fight against the former mayor. There’s a fundraiser here if you’d like to contribute (it’s mentioned in a local newspaper’s article as well).

It’s wonderful to see competency and common sense win out over irrational hatred in the South. What’s more is that having a leader as beloved as Moore in the public eye is precisely what South Carolina needs to change hearts and minds. Maybe the people of the state will begin to reconsider the wisdom of their marriage ban.

***Update***: The article originally said the mayor was fired. That’s wrong; he was just stripped of his powers. My bad. I’ve changed that in the post.

July 13, 2014
The Most Ridiculous Religious Loophole You'll Ever Hear About is the Subject of an FFRF Complaint
Next Post

July 13, 2014 Pope Francis: 1 in 50 Clergy Members Are Pedophiles
Browse Our Archives
What Are Your Thoughts?leave a comment