Last year, Pope Francis wrote a three-page-long letter that was published in the Italian daily La Repubblica. The letter came in response to two open letters written by the newpaper’s editor, Eugenio Scalfari, a well-known atheist. 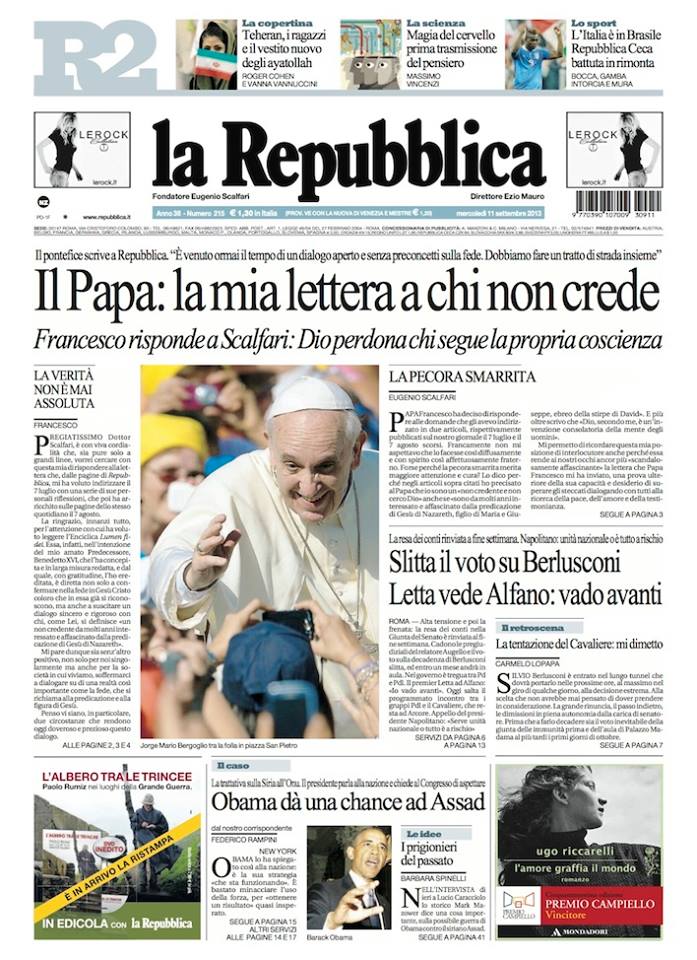 At the time, the Pope made headlines because he wrote that God’s mercy was available to atheists, if only they would “obey their conscience.” The media widely reported this as the Pope saying even atheists could go to heaven, though that’s not exactly accurate.

Today, La Repubblica is back in the news. In an hour-long interview with Scalfari, Pope Francis reportedly made what sounded like a shocking admission:

Francis condemned child sex abuse as a “leprosy” in the Church and cited his aides as saying that “the level of pedophilia in the Church is at two percent.” That figure includes priests “and even bishops and cardinals,” Italy’s La Repubblica daily quoted Francis as saying.

Two percent amounts to more than 8,000 Catholic leaders worldwide, a number that sounds ridiculously high, even for the Church, and a perfect example of where speaking off-the-cuff — and throwing out random numbers — can get you into big trouble.

The Pope also mentioned in the interview that the requirement of celibacy for priests was a problem, adding that “there are solutions and I will find them.”

It’s worth noting that Scalfari isn’t known to take notes during interviews. He just chats with his subjects and then writes the articles from memory. His 90-year-old memory. That doesn’t mean he’s making anything up. But when you have an interview from memory mixed with a Pope who doesn’t always deliver accurate sound bites off the top of his head, it’s not a very good combination.

As always, the Vatican was there to walk back some of the Pope’s comments:

Papal spokesman Father Federico Lombardi said that the quote on celibacy, as well as another in which Francis says cardinals were among the sex abusers, are inaccurate. Lombardi accused La Repubblica of trying to “manipulate naive readers,” according to Reuters.

There’s no evidence of any manipulation, for what it’s worth.

Look, this is the same Pope who was widely heralded for saying of gay people, “Who am I to judge?” even though the Church’s policies against gay people remain as awful as ever. He has a tendency to say seemingly-radical things that sound like a step forward for the Church… even though nothing changes from the inside. This appears to be just another example of that trend.

You would think that acknowledging the pedophilia problem within the Church is a good sign, but until there’s concrete action from the Vatican, there’s no reason to believe anything is really improving.

July 13, 2014
South Carolina Town Rallies Behind Police Chief Fired for Being a Lesbian
Next Post