The other day, I posted about a mother-daughter team who were fighting back against the factually untrue, abstinence-only sex education classes that were being taught in the Edmonton Public School District. 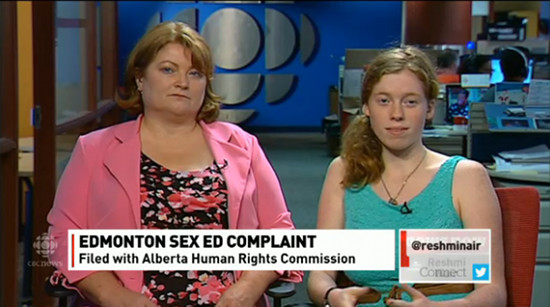 A quick summary: Emily Dawson, a recent graduate from Edmonton, Alberta, took mandatory sex education classes at her high school and was surprised to see that it was being taught by an anti-abortion activist from the Christianity-promoting Pregnancy Care Centre. The lesson consisted of misinformation, slut-shaming, and fear. (And, of course, all discussion about homosexuality was just shut down immediately.)

Emily and her mother Kathy filed a complaint with the Alberta Human Rights Commission, in which they said the sex ed program “infringed upon their rights as non-Christians.”

Well, there’s been a wonderful development. After all the pushback it received (presumably from people in Canada and beyond), the Edmonton Public School District has announced it will not be asking the Christian group to teach the class again:

The Edmonton Public School Board has said it will tell teachers not to use an anti-abortion centre to teach part of its sexual education curriculum, after a high school student filed a human rights complaint over what she was taught.

“We’re getting a significant (amount) of push back on the group, in terms of the program that they’re offering in our schools,” said Lorne Parker, acting superintendent with Edmonton Public Schools.

It’s not a definitive victory yet because a letter from the superintendent still leaves the door open for the group to come back at a later date, but it’s doubtful they will now that people are paying attention.

And what do the Christian presenters have to say about all this?

The Edmonton Pregnancy Care Centre told CBC News it was “disappointed” by the decision. Executive director Norah Kennedy said the news comes as a shock.

“I think that it’s fear-based,” Kennedy said. “I think that an individual who decides she’s going to just go after something can cause fear to happen.”

I don’t even know what that means. But I’d be scared, too, if my mandatory sex ed class was being taught by people who didn’t understand sexuality and insisted on teaching bullshit.

Just look at how defensive they get:

“While we have a faith background, the religious part does not come up in the public school or education,” said Jutta Wittmeier, director of the Calgary centre.

“That’s just not part of the program, it’s science- and research-based.”

She says teachers are in the room during the presentation, and that she “can’t imagine” they wouldn’t step in if the students were given misleading information. Wittmeier said that her group is specifically invited to talk about abstinence, and that it only makes up a small part of the larger Alberta sex ed curriculum.

“We, in reality, recognize … that while abstinence is a good choice, it is not the only choice. We talk about STIs, we talk about, to some degree, birth control, obviously.

There’s a very fine line, though, between directly preaching Christianity, and pushing Christian “values” such as abstinence and (a false sense of) modesty.

Wittmeier says teachers would step in if misleading information was taught, but that assumes the teachers know the material (in which case, why invite the so-called experts?) and that they would be brave enough to call out other adults in the classroom.

Finally, they say they “talk about STIs” and “to some degree, birth control,” but what they don’t tell you is how they do it. If you’re teaching that STIs are the inevitable result of any sexual encounter or God’s way of punishing you for having sex, that’s a problem. If you’re wrongly teaching that certain forms of birth control cause abortions (a la Hobby Lobby), that’s a problem. They don’t get specific because even they know that telling the truth would hurt their cause.

I’m glad the Dawsons aren’t pulling their complaint with the Human Rights Commission. This still needs to be investigated if for no other reason than to prevent it from happening again.

I don’t know them personally, but I can’t thank them enough for their courage in speaking out against this travesty and refusing to back down despite the really sensitive nature of the subject.

July 12, 2014
New Rule: Students Who Have a Same-Sex Wedding Can't Be Mad When Their Christian Schools Expel Them For It
Next Post