Greetings from sunny (presumably. I haven’t been outside in two days) Las Vegas!

I’m here at The Amazing Meeting 2014 with my trusty sidekick/photographer/gentleman friend Michael Greiff to live blog as much as the event as possible. While I’m here, I will also be recording a few Hemant-less (boo!) episodes of the Friendly Atheist Podcast.

Yesterday (Thursday) was our first day here, and between trying to schedule interviews and getting settled, we were able to attend one of the workshops.

I dropped into the “Blogging and Skepticisim: The Good, the Bad and the Ugly” workshop featuring the fine folks over at Skeptic Ink, and it was really delightful. Speakers inclded Beth Ann Erickson, Vandy Beth Glenn, Wendy Hughes, Jacques Rousseau and a fourth person whose name isn’t in the program and I don’t remember because I’m terrible at my job. 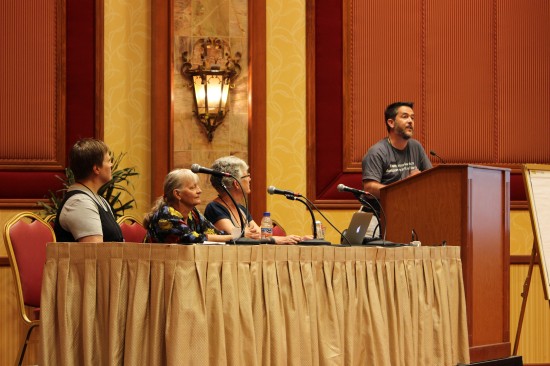 Not pictured above is Vandy Beth Glenn, who, upon her arrival, explained that she was running late because her hotel room is all the way at the end of the hallway, which she wrapped up beautifully by talking about this post, which I found delightful:

But I arrived at the South Point hotel and casino by early afternoon and checked into my room, which is all the way at the other end of a hallway from the elevators. One of the criminologists on the TV show CSI once said rooms so situated are nicknamed the “murder room,” because they’re too far from most other rooms on the floor for the noise to be heard.

I’ve tried to find confirmation of this, and can’t. It seems unlikely on several fronts. Mainly, are premeditated murders committed in hotel rooms often enough for this to become common parlance? If a person were planning a murder, would he (statistically, it’s a “he”) invite the victim to his hotel room first? More likely, he’d go to their hotel room, and it’s unlikely he could count on the victim choosing to rent a room at the end of the hall.

Moreover, murderers get to choose their methods, and there are many quiet ways to kill a person. A murderer thinking far enough ahead to specify this room would also have the forethought to buy a silencer, a garrote, some poison, or what-have-you (you’ll all be pleased to know I’m not well-studied in murder weapons). He could plan it so that it makes as little noise as possible. 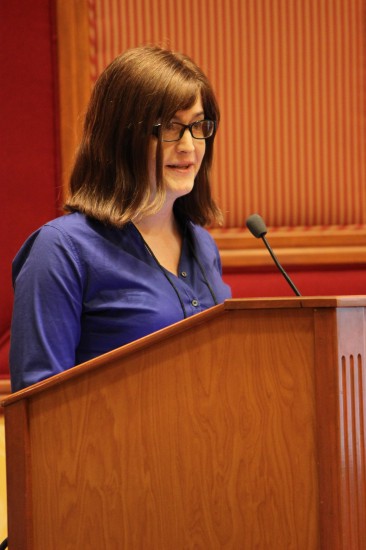 I found it endlessly amusing and well put together, as were all the presentations by the bloggers, and had the opportunity to meet with them and say as much at the welcome reception later that day.

Then, most of us got the opportunity to watch a screening of An Honest Liar, a new documentary about James Randi. I’ve heard about this movie since TAM last year and was really looking forward to seeing it and I was not disappointed. It was really remarkable, and I encourage everyone to get out and see it as soon as it comes to a theater near you.

I chatted with Tyler Measom, one of the director and producers a bit after the movie and he was delightful, so I invited he and his co-director/producer, Justin Weinstein, to come on the podcast, so keep your eye out for that in a few weeks.

Okay, that’s all I’ve got for you right now. Again, if you’re attending TAM, please come by and say hello. If there’s anyone attending who you’d like to hear on the podcast or just want to say hi or that I’m doing a wonderfully medium job, tweet me @blueburie.