There’s a reason we need secular laws in this country; because religious groups don’t know how to police themselves. And the latest example involves Roy Neal Yoakem, pastor of New Gospel Outreach Church in Kentucky. He was arrested on Monday on statutory rape charges: 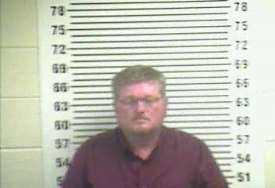 According to police, Yoakem sexually assaulted the [14-year-old] teenager on two occasions last month, once at New Gospel Outreach Church in Scottsville where he was the pastor and once at his Gallatin residence on Edgewood Drive.

Yoakem is also a convicted sex offender, according to the release. In 2005 he was convicted in Kentucky of second degree sexual abuse of an 8-year-old boy and is currently registered in Tennessee as a violent sex offender.

So here’s the question: How did a convicted sex offender get a job at a church, where he was able to rape again?

“We’re firm believers in the Bible so if God’s forgiven you, then we’re in no position to treat you otherwise,” Bratcher said.

Ah. Yoakem said God forgave him, and that was apparently enough for the church.

Either God needs to be less forgiving or the church needs to do a better job vetting its leaders.

“With these kind of things, it does look negatively on the church. We ask the community not to view the church or its members negatively,” Bratcher said.

Damn right it makes you look bad. And we should be horrified by how irresponsible these church leaders were to give a violent sex offender access to even more children.

At some point, forgiveness stops being a virtue and turns into naïveté.

July 10, 2014 The (Actual) Runner-Up Religion of America
Browse Our Archives
What Are Your Thoughts?leave a comment