Rep. Louie Gohmert, Who Thinks Climate Change is a Hoax, Explains Why Atheists are Intellectual Inferior

Rep. Louie Gohmert, who makes Sarah Palin sound like she has a Ph.D., went to a Christian revival event last night and told the audience that atheists just don’t get it: 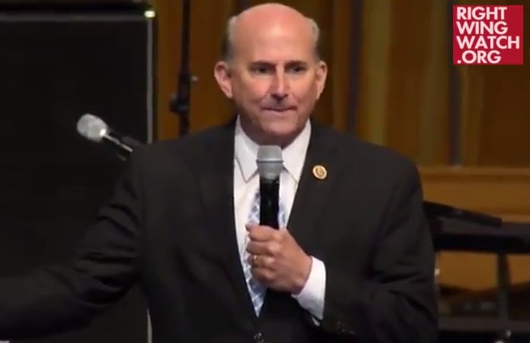 There was an old gentleman from Texas, from Nacogdoches, and Bob Murphy used to say, “You know, I feel so sorry for atheists! I do!” He said, “You don’t think about it! No matter how smart they think they are, an atheist has to admit that he believes the equation: Nobody plus nothing equals everything.” He says, “How embarrassing for an intellectual to have to say ‘Yeah, I believe that.’ Nobody plus nothing equals everything.”

Well, you couldn’t get everything unless there was something that was the creator of everything. And that’s the Lord we know.

Gohmert, of course, believes that 1 + 1 + 1 = 1 and that it’s perfectly logical to believe God has just always been here without a creator of His own…

Anyway, that line about how atheists believe something came from nothing is a gross oversimplification. It’s a philosophical trick. Arguing that the Big Bang came from nothing makes no sense because there is no “before” the Big Bang. (Austin Cline has a nice explanation here.) It might mess with your head at first, but it’s really an unanswerable question.

For Gohmert to suggest atheists are intellectual inferiors for not making up a Creation myth of our own says far more about his own academic abilities than ours.