Earlier today, it was announced that COSMOS: A SpaceTime Odyssey received an impressive 12 Emmy nominations in the following categories: 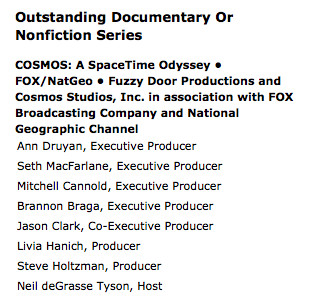 Not that they’re planning to make a second season of the show, but the nominations bode well for primetime science programs in the future. In fact, the National Geographic Channel International announced this week that the show surpassed their wildest expectations:

Not bad at all. Now, if only there were some way to discern how many Creationists watched the show…

Even if COSMOS doesn’t take home any Emmys in the categories that focus on the show’s content, Seth MacFarlane, Ann Druyan, and their entire team deserve a lot of credit for bringing an intelligent program to network television and doing justice to Carl Sagan‘s original series.

July 10, 2014 More Than a Year Later, School Board's Decision to Not Have Prayers at Meetings Still Controversial
Browse Our Archives
What Are Your Thoughts?leave a comment