Last night, Paul Tjaden delivered a secular invocation at a meeting of the Groveland City Council (in Florida): 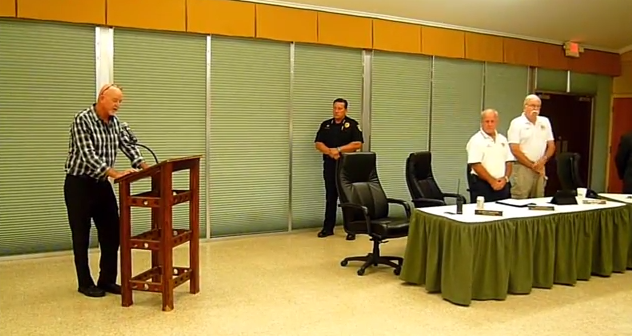 Mr. Mayor, Members of the Town Council, and citizens of Groveland.

For tonight’s invocation I would ask that instead of bowing your heads you would just take a moment to look around at others who are here tonight. Fifty years ago, had you done that, the people you would be looking at would be people you had known most of your lives. They would be old friends from school or the church you attend on Sunday.

But since then, our community has seen incredible growth, with people moving here from other states and from countries around the world. We have citizens who are Christian, Jewish, Hindu, Muslim, Buddhist, Wiccan, and people who profess no religious belief at all. I believe that any prayer in this diverse setting would cause at least some of our citizens to feel like outsiders, that they had entered a place where their requests or problems might be considered with suspicion or indifference because their beliefs differed from the majority.

Because of this and in respect to all of our citizens, I come before you to invoke the spirit of goodwill between all of us. To be sure, we do not agree about everything and we often feel fiercely protective of what we do believe. But there is one thing on which we all agree: We share the goal of making our community the best place it can be. We unite here with that aim and common purpose.

Tjaden, who will also be delivering an invocation in Lake County this August, is a member of the Central Florida Freethought Community, a group that’s organizing several more secular invocations all over the state. You can see their running list — along with a compilation of transcripts of secular invocations around the country — right here.

(Thanks to CFFC’s David Williamson for the video and transcript)

July 7, 2014
Kentucky State Senator: Mars Has the Same Temperature as Earth, so Climate Change is a Hoax
Next Post