There’s No Reason to Thank God After He Nearly Killed You July 7, 2014 Hemant Mehta

50-year-old Steven Robles was lucky he didn’t die over the weekend.

He was swimming in Manhattan Beach in Los Angeles when a seven-foot-long great white shark somehow broke free from a fishing line and ended up biting Robles on his torso: 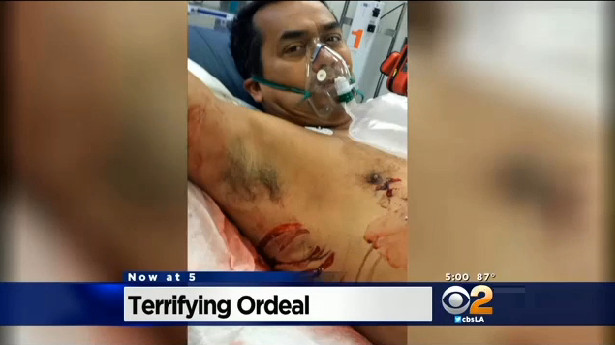 “For a second, I thought this might be it,” Robles said. “I was absolutely terrified. I never thought I would die in the ocean.”

“I was screaming at the top of my lungs. My first instinct was to grab my friend… he held me and was taking it in what was going on,” Robles said.

A couple of fisherman caught this all on camera and Robles commented on the fact that one of them was laughing in that video:

“What the hell was he thinking? I was almost ready to die right there,” Robles said. “And I don’t think they understood what was really going on. I hope they didn’t understand, because if they did, oh my God, it wasn’t even close to funny. This was me about to lose my life.”

So we’re pretty clear on the fact that this was bad. Really, really bad. Thankfully, Robles should be back to normal in no time.

… and you know damn well why I’m bringing this story up on this site:

“I’m very lucky to be here. I’m very thankful God was on my side, protecting me. I truly believe God was my savior today,” he said.

God was on Robles’ side?! God was his savior?!

If that’s how a benevolent God acts, Robles should be thankful God wasn’t in a bad mood this weekend.

Much like someone who survives a massacre, it’s just another example of someone thanking God even when it’s abundantly clear that, if God really was in control, He deserves no praise whatsoever.