No such conclusion applies to the ostensibly Buddhist monks of New York City, who are, in most cases, just aggressive beggars with shaved heads and flowing robes — and who don’t know the first thing about Buddhism, suggests the New York Times: 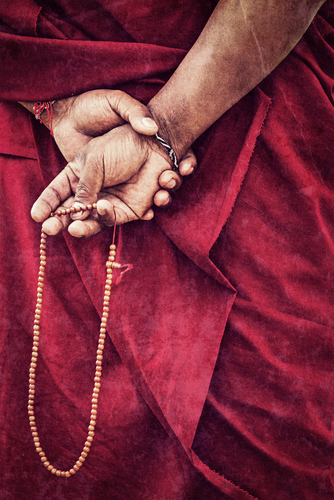 They are mostly men of Chinese descent, with shaved heads, beatific smiles and flowing robes of orange, but sometimes brown or gray. They follow a similar script: Offering wishes of peace and a shiny amulet, they solicit donations from passers-by, often reinforcing their pitch by showing a picture of a temple for which the money seems to be intended. Then they open a notebook filled with the names of previous donors and the amounts given.

The men appear to be Buddhist monks; a smaller number of similarly dressed women say they are Taoist nuns.

But they’re really just impostors, who prove that a demand for money can be successful if you slather it in religious sauce.

[T]hese monks tend to stand out, both for their attire and for their sense of entitlement. They offer the amulet and, in some cases, a bracelet; if they are not satisfied with the donation, they unabashedly demand $20 or more. …

Now it can be difficult for authentic monks to walk around in Midtown without drawing negative attention.

The administrators of the Facebook page Fake Monks in New York City estimate that the most successful of the faux-pious Big Apple panhandlers clear up to $500 a day.

The lucrative begging under the guise of religion is ubiquitous in other countries too. For instance, imitator monks have been making a nuisance of themselves in Hong Kong, mainland China, Canada, Australia, and New Zealand.