Here’s an illustration that literally comes out of Creationist Ken Ham‘s playbook: 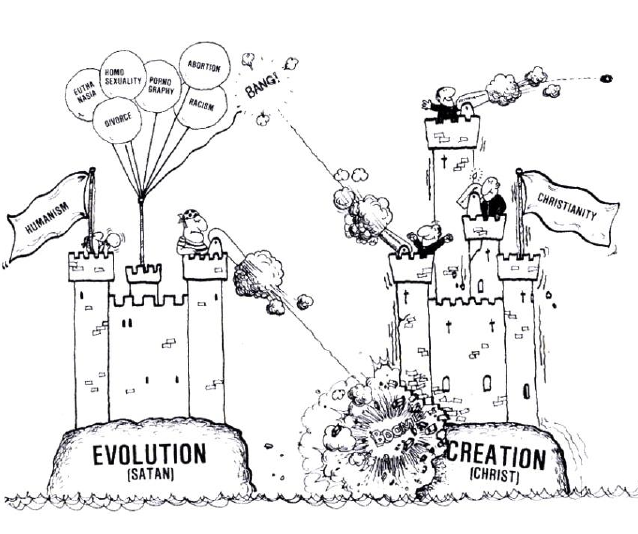 It shows how accepting evolution — or “reject[ing] God’s Word,” as Ham puts it — leads to homosexuality, abortion, racism, divorce, pornography, and euthanasia. (I’m pretty sure Ham is the guy atop the Creation Castle, grinning while shooting the wrong way because he has no idea what the hell is going on.)

Anyway, I bring this up because a version of that slide appeared in a PowerPoint presentation during Anquinette Jones‘ freshman biology class at Grady High School in Atlanta: 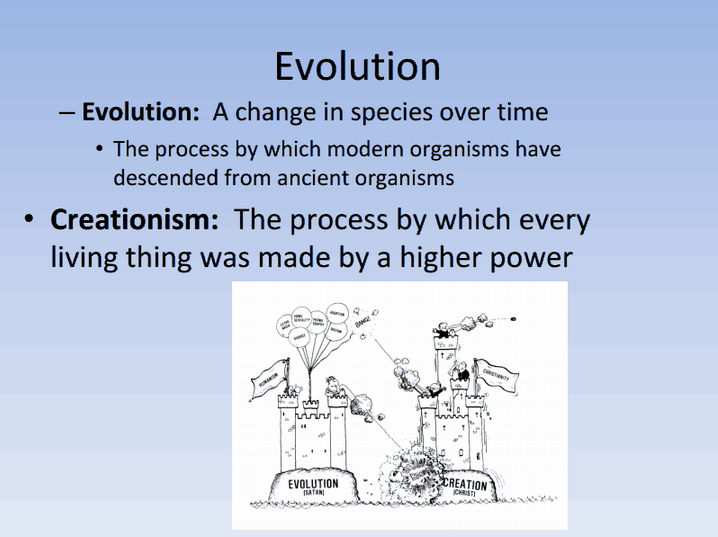 We know this thanks to a wonderful article published back in May in the school newspaper by two then-seniors Josh Weinstock and Archie Kinnane. (The story picked up steam this weekend after Maureen Downey of the Atlanta Journal-Constitution reported on it.)

Jones, the teacher, said she got the PowerPoint from the district’s file-sharing database, where it was uploaded by project manager Mary E. King. (King wouldn’t respond to the students’ request for comment.) As a teacher myself, I wondered how Jones didn’t catch this slide herself until I heard about some of the other things she had said in the classroom (which Weinstock and Kinnane brought to light):

Freshman Lily Soto, who switched from Jones’ biology class after the first semester, said Jones had refused to teach evolution when the class approached the portion of the [curriculum].

“She always had random comments about [creationism],” Soto said. “If someone would ask if we were going to learn evolution, she was like, ‘No, I don’t teach that.’”

Sophomore Isabel Olson, who took biology from Jones last year, said that this cartoon was not the first instance of creationism being discussed in class. She said that one time, a classmate asked how cells were created.

“Ms. Jones’ answer was [something like], ‘It’s divine, God created us.’” Olson said.

Olson said she went to talk to administrators about the religious aspect of Jones’ teaching, but they didn’t take any action.

The student journalists also reported that Jones had students debate the merits of evolution and Creationism, as if there’s a debate to be had.

Maureen Downey attempted to get in touch with all the people involved in this controversy — since they weren’t getting back to the student journalists — and finally heard back from Atlanta Public Schools spokeswoman Jill Strickland Luse:

“It appears that this science lesson plan was not properly vetted prior to being uploaded to the district’s SharePoint website last summer. When the district learned of the PowerPoint presentation and worksheet that is in question, the lesson and supporting documents were reviewed, and they were immediately removed… The district is currently reviewing the vetting process for all lesson plans prior to uploading them for instruction. In addition, the curriculum coordinators will review lesson plans with teachers as part of their pre-planning session later this month.”

That’s a step in the right direction. But we still don’t know if the district is investigating Jones’ supposed promotion of Creationism in the classroom or King’s reasons for included the slide in the presentation. Those, to me, are much bigger issues right now. I know this is the South, but how pervasive is this problem of Creation being offered as an alternative to evolution? And what are district officials doing to prevent that sort of evidence-free bullshit from being taught in district classrooms?

(Downey also points out that the PowerPoint includes “grammatical errors and odd illustrations including a photo of Octomom.” While I share her frustration with the grammar mistakes, I could rationalize the Octomom picture being thrown in there as an attempt to inject humor into an otherwise dry presentation. It doesn’t bother me that much.)

I tried to contact Josh Weinstock last night to find out more background about this story and what the aftermath has been like for him, but I haven’t heard back from him yet.

Weinstock and Kinnane deserve a lot of credit, though, for bringing this story to light. How a teacher and district staffers were able to get away with this — and for how long? — is just unbelievable. Also, hats off to all those students who gave permission to be quoted in their article. That couldn’t have been an easy decision.

July 6, 2014 Are the Countries That Contribute the Most Good to the World Also Home to More Atheists? Let's Find Out
Browse Our Archives
What Are Your Thoughts?leave a comment