Really, Canada? This is What You Call a Breakdown in Church/State Separation? July 5, 2014 Hemant Mehta

Really, Canada? This is What You Call a Breakdown in Church/State Separation?

Canadian Prime Minister Stephen Harper did something a couple of days ago that wouldn’t even generate a raise of an eyebrow in the United States. Celebrating Canada Day on July 1, he tweeted this seemingly innocuous message: 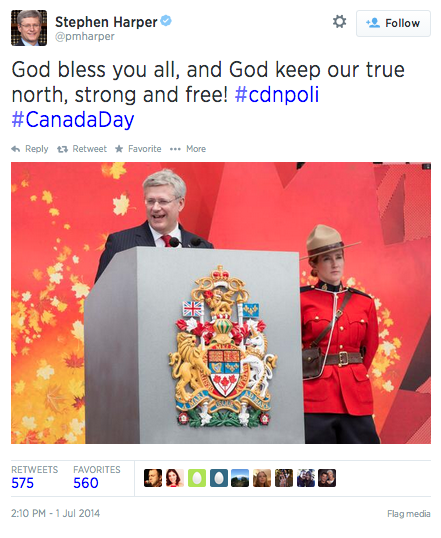 God bless you all, and God keep our true north, strong and free! #cdnpoli #CanadaDay

We’re so used to the requisite political mentions of God that the message hardly seems out of place, but in Canada, where such mentions don’t happen regularly, it actually generated enough pushback that Yahoo published an article about the “outrage” that tweet generated:

The reaction online was pointed, with the feathers of users becoming instantly ruffled by the post. “Which God? Zeus?” one person asked. Another sniffed that there was “clearly no separation of church and state for this PM.”

As Harper’s defenders pointed out on Twitter, Canada has no official separation between church and state, as there is in America. The Canadian Charter of Rights and Freedoms links God to the “rule of law” in Canada. But there is still a general unease about governing a multicultural nation in the name of a specific deity.

Indeed, moments of tragedy and while celebrating the military — a profession that calls for members to face their mortality for a larger purpose — are very natural moments to consider religion and thank one’s god. But the reference on Canada Day seemed to come out of nowhere.

Is it evidence of a larger plot to drag religion into Ottawa’s decision-making process?

No, but some people sure took it that way.

This is the intersection of religion and politics that ticked some people off?!

Wait till I tell you about Hobby Lobby and the U.S. Supreme Court. You’re gonna lose your minds…

(I should point out that this sort of “pushback” occurs when a political figure says *anything* on Twitter. This instance is hardly an anomaly. I’m just amused that anyone would write an article suggesting that this tweet was an example of religion and politics getting a little too close.)

(Thanks to @Axe_Grrl for the link)