If you ever visit Boystown, a part of Chicago where a lot of LGBT people live, you’ll undoubted pass by a bar called Sidetrack. It’s a video bar that features events like Show Tunes nights and 60s/70s music nights.

They also have a Comedy Video night where they play clips that would be entertaining for a predominantly gay male crowd. Like the pre-South Park film The Spirit of Christmas which features Jesus fighting Santa Claus: 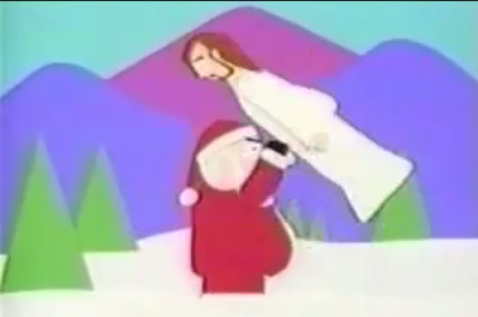 Really, any comedy routine that involves going after homophobia or organized religion would work.

And that’s part of the reason the bar was sued by a former employee, Joseph Parker, who claimed that he suffered “religious harassment on purportedly anti-Christian video clips Sidetrack played during comedy nights, offensive performances ridiculing Christians at special events, and degrading comments Sidetrack employees… made to Plaintiff because of his religion and his relationship with [conservative Christian blogger Kevin] DuJan.”

How that’s for overreach? I was harassed because they played George Carlin routines on the big-screens!

Just because you don’t agree with what’s being said doesn’t mean anyone is harassing you for your beliefs. There’s also a major difference between going after people and going after their bad ideas. (And, obviously, several Christian denominations are very supportive of the LGBT community.)

There’s far more to the lawsuit than just the religious harassment issue, but the good news is that a district judge rejected that particular claim last week. Regarding the video clips, Judge Amy J. St. Eve wrote this:

In making this determination, the Court notes that the allegedly offensive anti-Christian video clips … do not contribute to the alleged hostility of his work environment. Sidetrack played the video clips during “Comedy Nights,” and it obtained all or at least a vast majority of the clips from mainstream broadcasts. None of the allegedly offensive material was directed at Plaintiff. Sidetrack, moreover, is known for playing comedic and other video clips on screens around the bar. The Court must evaluate the “totality of the circumstances” …, but it need not — and must not — abandon common sense and sensitivity to social context in evaluating the alleged hostility. Just as a reasonable professional football player would not consider his working environment to be severely or pervasively hostile “if the coach smacks him on the buttocks as he heads onto the field,”…, a reasonable person in Plaintiff’s position would not view mainstream video clips played as part of Sidetrack’s Comedy Night events to create or even contribute to an allegedly hostile work environment.

Eugene Volokh, who teaches free speech law at the UCLA School of Law, defended the judge’s decision, adding that it should’ve gone even further:

… I think that imposing liability even in part based on the anti-Christian speech in videos, stand-up routines, signs at the bar and the like would violate the First Amendment. I’m glad, therefore, that the court rejected those claims, though I fear that the court’s rationale is too narrow. Even if such speech wasn’t “mainstream videos,” or consisted of overheard conversations in a company lunchroom or some such, it shouldn’t lead to legal liability.

As I mentioned, there are other (more serious) aspects of the lawsuit that have not yet been decided, but at least this ridiculous notion has been put to rest.

July 5, 2014
This is What a Christian Revival Looks Like When People Don't Know How to Play Along
Next Post

July 5, 2014 Foundation Beyond Belief Announces Q3 2014 Slate of Charities
Browse Our Archives
What Are Your Thoughts?leave a comment