Ken Ham, the Creationist version of Joe Camel, is trying to lure kids and their gullible parents into the Creation Museum with a new series of billboards and TV commercial to appear in Kentucky, Ohio, and Indiana: 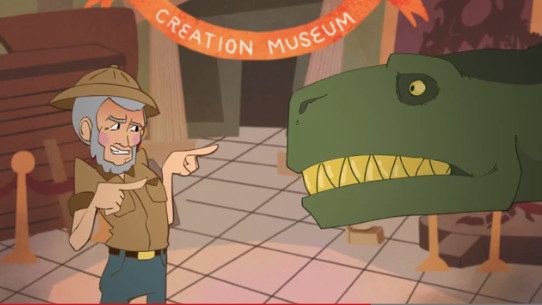 Oh! And Ham’s onto us. He knows the only reason people like me criticize his ad campaigns is because we want to suppress all dissent:

We find that many secularists just can’t help themselves when we conduct these promotional campaigns — they react in various ways because they don’t want people to know about the Creation Museum. They are so intolerant of Christians getting their message out. Yes, these secularists only want people to hear their message of hopelessness and meaninglessness which comes out of their humanistic worldview.

Ham is a liar. We know this because no atheists are protesting his campaign. No one’s calling for the billboards to be taken down. No one’s trying to vandalize them (and most of us wouldn’t stand for it if anyone did).

And the only people who think atheists have a message of “hopelessness and meaninglessness” are those who never bother to challenge their own stereotypes.

We oppose the advertising because it’s promoting a product that’s bad for children: Misinformation.

We want kids to become strong thinkers, not automatons who mindlessly believe bullshit because of a very specific and false interpretation of the Bible. The Creation Museum is all about promoting what you should believe, not how you should think.

In fact, Answers in Genesis will never run an ad campaign promoting critical thinking skills — because that’s not what they offer. Only real science museums would dare to expand your mind. Ken Ham will just give you cutesy animations and the ability to take a picture next to some dinosaur bones. That should be enough to distract children for a little while so they don’t have time to pick up a science book and actually learn something.

July 4, 2014
This October, Tim Minchin Will Release an Illustrated Book Version of "Storm"
Next Post

July 4, 2014 An Online Sexuality Class for Atheists Who Grew Up Feeling Guilty or Misinformed About It
Browse Our Archives
What Are Your Thoughts?leave a comment