The Weirdest Religious Demographic Ever: Non-Christians Who Think the Bible is Literally True July 3, 2014 Hemant Mehta

The Weirdest Religious Demographic Ever: Non-Christians Who Think the Bible is Literally True

Last month, a Gallup poll showed that 75% of Americans think the Bible is the word of God, literally or otherwise. 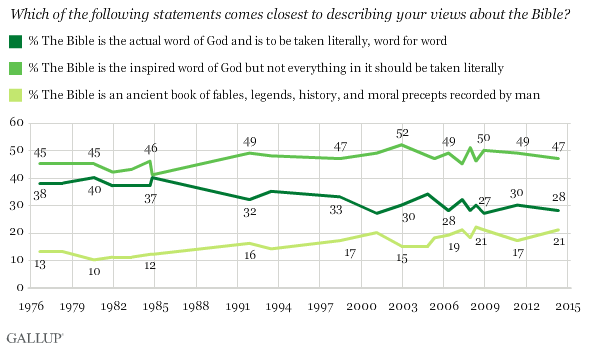 But when Gallup broke down their numbers, there was a surprising group of people on the list: Non-Christians who said that the Bible was the literal word of God. 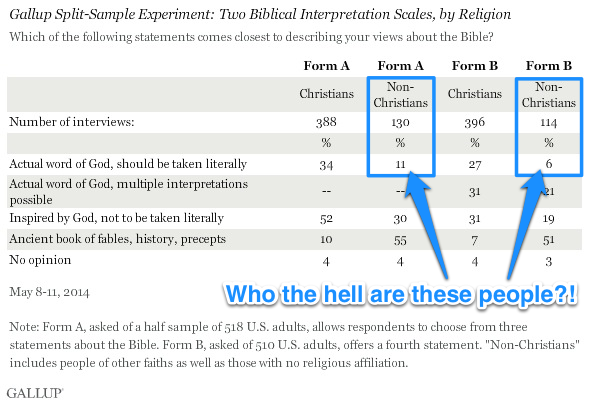 That’s nearly two dozen people we’re talking about! If they think the Bible is literally true, why would they not be Christians?!

Ted Olsen and Ruth Moon at Christianity Today tried to get to the bottom of it by looking at the Gallup poll and other surveys to see what they could find out about these “Non-Christian literalists”:

They may be poorer, but it’s hard to tell from the data.

It’s a lot of speculation and they admit that, concluding that even they don’t know who the hell these people are:

In the end, it’s hard to create a profile of the non-Christian biblical literalist…

The demographics of this small portion of the U.S. population — 2 to 11 percent, depending who you ask — also serve as a reminder that imprecise survey items like the literalism question can introduce confusion.

Even if you put the number at 2.1%, we’re talking about nearly 7,000,000 Americans who aren’t Christian but who believe the Bible is literally true, Genesis and Jesus’ resurrection and all.

That is, as Olsen and Moon mentioned, if they even understand what the question is saying. That may be the biggest challenge here: Getting pollsters to ask precise questions that make sense to everybody. It’s likely that confusion, more than anything else, is why some non-Christians think the Bible is true yet don’t convert. Maybe they would say the Koran is true as well. Because religion always deserves respect.

It’s the same complaint you hear whenever Gallup releases polls about evolution versus Creationism. Do all the people responding to the survey really understand the concepts they’re being asked about?

Probably not. But if anyone seriously falls in that weird demographic, I would love to know why…

July 3, 2014 Christian Rappers Sue Katy Perry for Linking Their Music to Witchcraft, Paganism, and the Illuminati
Browse Our Archives
What Are Your Thoughts?leave a comment