Once Again, Louisiana Sheriff Will Lead Christian Rally on Fourth of July

Last year, the Bossier Sheriff’s Office in Louisiana lost $15,000 in federal funding for its Young Marine Program. On the surface, the program sounded great, promoting the “mental, moral and physical development of its young recruits.”

The problem was that it was a religious program, emphasizing “the love of God and fidelity to our country,” subjecting members to a Young Marine Obligation to not disgrace or dishonor God, and having students sign on to a Young Marine Creed that included: “Keep myself clean in mind by attending the church of my faith.”

The Civil Rights Division of the Department of Justice made it very clear that the money would be returned to the Sheriff’s office once the God references were removed. That never happened. Sheriff Julian Whittington complained to Governor Bobby Jindal, prompting Jindal to join him at an “In God We Trust Rally” last July 4:

That’s when Sen. Mary Landrieu (D-LA) stepped in. She sponsored a bill that would “prohibit the revocation or withholding of Federal funds to programs whose participants carry out voluntary religious activities.” 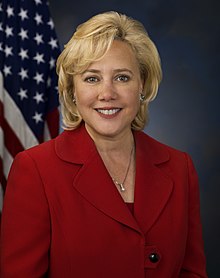 The problem is that these religious activities weren’t exactly voluntary. The references to God were built right into the program. You may have been able to get away with not saying them, but there’s no doubt this was religious proselytization at some level.

Landrieu’s bill stalled in committee, but she found a way to get it passed, anyway. She tacked it onto page 975 of the Omnibus Spending Bill passed by Congress:

No funds appropriated in this Act may be used to prevent the implementation of programs of voluntary prayer and meditation in the public schools.

With that insertion, Landrieu gave religious groups a loophole with which they could push religion into public schools. All they had to do is insist that students weren’t required to say all the godly oaths and creeds in their programs and they could Jesu-fy up everything they do.

The spending bill passed in the House on a 359-67 vote and passed in the Senate 72-26. President Obama signed it once it reached his desk.

The senator was thrilled about her “freedom to pray” provision, of course:

Sen. Landrieu said, “Programs like the Young Marines in Bossier City will now have peace of mind knowing that they will not have their funding revoked because they offer voluntary prayer or other religious activities.”

Sen. Landrieu also said, “The Department of Justice’s overreach threatened not only the positive contributions of Young Marines to Bossier, but community enhancement programs like this across the country. I’m proud to have secured this provision that will help avoid the unnecessary conflict that the Young Marines experienced the last couple years with the Department of Justice.”

There was no “overreach” here. There was just reach. The Department of Justice was doing its job by not funding a blatantly religious program, voluntary or not.

There was no reason a local church couldn’t sponsor the Young Marine Program, even with the Sheriff’s support (when he’s off-duty). There was also no reason the references to God couldn’t be removed from the program.

But neither of those options were even considered. Whittington got his taxpayer money for a religious event — and he had to support of some of the highest-ranking politicians in the state.

Now, it’s happening all over again.

This Friday, on July 4, Sheriff Whittington will once again hold a prayer rally on government property:

“Not only am I elected to serve the people of Bossier Parish, but I live here and my family lives here. I think Bossier Parish is a better place with Christianity and Christian values involved in it. I am an elected official. I’m also a citizen here. I think this is what’s best for us. I don’t work for anybody in Washington. What they do, what they say, I couldn’t really care less,” Whittington said. “We’re No. 1 in a lot of areas. The fastest growing parish north of I-10, a safe community, great schools, good government. Frankly, we know how to operate and what to do.”

“Last year, we didn’t really know what we were doing and we had so many people, so much reaction from people, so we held the event and over 1,000 people showed up and said, ‘We agree with you. For a nation that was founded on Christian values, our government was formed around it, it’s on our money, it’s in our oath, we pledge as elected officials, to somehow now say it’s somehow taboo or you have to run with it is ridiculous. We agree with you. Stick with it,’” Whittington said.

The problem is that the Sheriff doesn’t understand or care for the law. No one’s stopping him from praying on his own as a citizen. But for him to use his office and title in promotion of religion is illegal. If anyone but a Christian was doing what he’s doing, there would be a national outcry. That “over 1,000” other uninformed people confirmed his faulty thinking means nothing.

(Speaking of uninformed people, Governor Jindal won’t be there in person but he has already prepared a videotaped message.)

When asking about the recent 5-4 Town of Greece v Galloway decision, Whittington doubled-down on his Christian Persecution Complex:

“That shows just how close, one vote, how that could very well be out the window sooner than we think. It’s a good barometer for where we are,” Whittington said. “It goes back to one reason people are so involved and feel so strongly about it. People are realizing that as well. For the most part, people have sat back and left it up to someone else and not worried about it. It’s time to be worried.”

He doesn’t get it. If the decision went the other way, it still wouldn’t have prevented Christians from praying — on their own, before the meetings.

What Whittington wants is for the government to endorse and honor his magical friend. He wants special treatment for being Christian. He wants members of the community to understand they’re second class citizens if they don’t belong to the same faith he does.

What an awful role model and irresponsible elected official.

(Thanks to Randall for the link. Large parts of this article were posted earlier.)

July 2, 2014
The Vatican Finally Admits That Most Catholics Ignore Church Teaching on Sexuality
Next Post