Former South Carolina GOP chairman Chad Connelly (below) is the Director of Faith Engagement for GOP Faith, a new outreach campaign to reach out to conservative Christians… because that’s a demographic the Republican Party just hasn’t been able to crack yet. 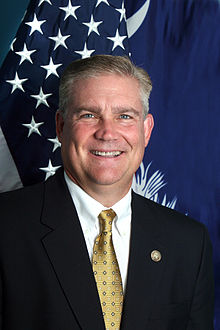 During an appearance on Sandy Rios‘ American Family Radio show on Monday, Connelly made it very clear that GOP Faith is a very narrow campaign indeed, since he finds it inconceivable that anyone who believes in God could even vote for a Democrat:

Rios: There are some very good elements, certainly, in the Republican Party. I wish I could say the same for the Democratic Party. I can only find, again, one pro-life Democrat in the House right now.

Connelly: How does a believer vote that way now, Sandy? We just gotta get our people involved…

Maybe because there are religious people out there who understand that conception doesn’t begin at ejaculation.

Maybe because there are religious people who know that giving women a safe choice over what they do with their bodies is more important than forcing their will onto everyone else.

Maybe because there are religious people who want nothing to do with a political party that essentially doubles as a church — when elected officials are supposed to represent all Americans and not just the Christian ones.

Connelly’s argument can best be summed up like this: religious people should be selfish. Vote for the party that’ll give you everything you want! Forget about Jews and atheists and gays and lesbians and immigrants and the poor!

Later in that same clip, Connelly urges pastors to run for office just to hammer home the point that only Christians matter. Hell, the rest of us have no integrity at all:

… It used to be exalted, if you were a person of integrity, if you were Christian, people said, “Hey I can count on him.” And now we scratch our heads and wonder why we can’t count on more of these people. It’s because they don’t have a core line, a base line.

I’m not sure who GOP Faith’s target audience is supposed to be. Because they won’t gain any ground by talking to the same crowd as usual. It’ll barely have any effect on younger voters, I suspect, since they’re tired of the strong alliance between religion and the GOP. Even Glenn Beck‘s website makes that point.

Asking how people of faith can vote for a Democrat is the type of rhetoric you expect from people who still think President Obama is a secret Muslim. It’s willfully ignorant.

I wish I could say the Democrats were a party of no faith… but that’s not the case at all. They love religion, too, which means we have two major political parties in our country that rely on a God-fearing base. The Republicans just go after the extremists. Then they have the audacity to throw their hands in the air and ask why other Christians aren’t also on their side.

It’s because those Christians, like the rest of us, can see past faith, especially faith that’s only used for political marketing.