The Supreme Court Also Said Today It Would Not (Yet) Decide if the Mount Soledad Cross Is Unconstitutional June 30, 2014 Hemant Mehta

Lost in the shuffle of today’s Hobby Lobby ruling, the Supreme Court issued another decision today that should make church/state separation advocates smile. At least a little bit.

A quick recap: The Mount Soledad controversy, which began nearly 25 years ago, is the longest-running Establishment Clause case in American history.

It involves the Mount Soledad cross in San Diego — a huge cross on public land erected in 1954. After the now-deceased Philip Paulson challenged the cross’ constitutionality more than two decades ago and after atheist Steve Trunk took up the case a few years ago, atheists have generally prevailed in the court system. In 2012, the Supreme Court declined to hear any more challenges from Christian groups, putting the future of the cross back in the hands of lower courts.

Last December, U.S. District Judge Larry Burns ordered the cross to come down from the mountain within 90 days… but the ruling was stayed until the other side had a chance to appeal.

In April, lawyers from the U.S. Department of Justice filed a petition with the Supreme Court saying they would be defending the cross if lower courts ruled that it had to be taken down.

When the proper time comes, the new brief said, the government will ask the Justices to overrule a ruling by the U.S. Court of Appeals for the Ninth Circuit more than three years ago that the Mount Soledad cross represents a violation of the Constitution’s religion clause. It was in reaction to the Ninth Circuit’s ruling that a federal judge reluctantly ruled last December that the cross had to come down, as “the only remedy” for that violation. The judge’s order is on hold for the time being.

… Taking down the monument, [the petition] said, would “unnecessarily foster religious division.”

But, it added: “To be clear, the United States continues to believe that this case raises an issue of great public importance.” If the order to remove the cross is upheld by the Ninth Circuit, “the government expects” to file its own appeal to the Supreme Court, it said.

The Obama administration, under the leadership of Eric Holder, was attempting to defend the existence of a giant Christian symbol on federal property. The fact that the Cross is more than 60 years old is irrelevant. Keep in mind that, before 1989, it was referred to as the “Mt. Soledad Easter Cross” and not as a war memorial — the name was changed to make it sound less “Christian-y.” This is so obviously an endorsement of Christianity on public land. The administration should be following the lower courts’ lead, not defying the Constitution by defending it.

Today, the Supreme Court via Justice Alito said it would not take up the case before lower courts had a chance to rule on the matter: 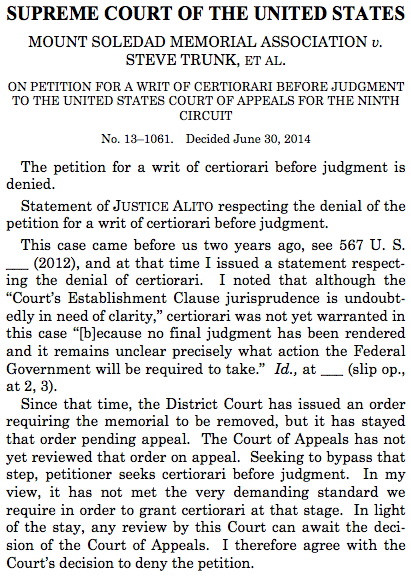 Since that time [2012], the District Court has issued an order requiring the memorial to be removed, but it has stayed that order pending appeal. The Court of Appeals has not yet reviewed that order on appeal. Seeking to bypass that step, petitioner seeks centiorari before judgment. In my view, it has not met the very demanding standard we require in order to grant centiorari at that stage. In light of the stay, any review by this Court can await the decision of the Court of Appeals. I therefore agree with the Court’s decision to deny the petition.

This is very good news. Given the conservative bent of this Court, having them rule on any church/state separation case is a bad idea (just look at how they ruled in Town of Greece v. Galloway.) I’ll gladly take postponing the case in lieu of Justice Kennedy deciding it.

(Portions of this article have been posted before.)