No, the First Scientific Proof of God Was Not Found June 28, 2014 Hemant Mehta
Patheos Friendly Atheist. ... Want more from the Friendly Atheist? Get our FREE Newsletters and special offers!

No, the First Scientific Proof of God Was Not Found

This article’s been making the rounds online over the past week, especially on Facebook, where your religious relatives have undoubtedly sent you a link: 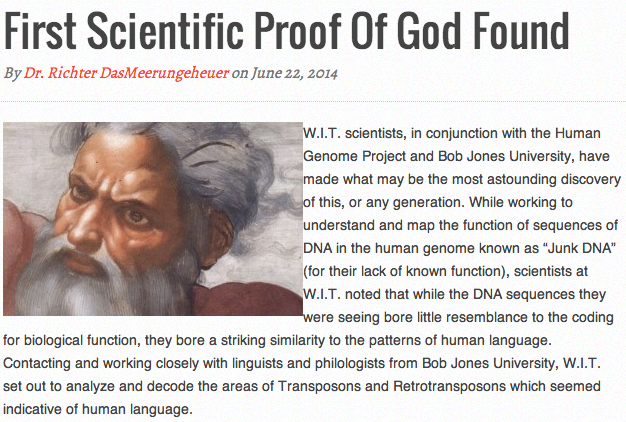 W.I.T. scientists, in conjunction with the Human Genome Project and Bob Jones University, have made what may be the most astounding discovery of this, or any generation. While working to understand and map the function of sequences of DNA in the human genome known as “Junk DNA” (for their lack of known function), scientists at W.I.T. noted that while the DNA sequences they were seeing bore little resemblance to the coding for biological function, they bore a striking similarity to the patterns of human language. Contacting and working closely with linguists and philologists from Bob Jones University, W.I.T. set out to analyze and decode the areas of Transposons and Retrotransposons which seemed indicative of human language.

Let’s play a game. It’s called: “How can we tell when something is satire?”

The Wyoming Institute of Technology isn’t a real place. (Don’t confuse it with the Wyoming Technical Institute, which is.)

The websites for most institutions of higher learning don’t have ads from Comedy Central in their sidebars.

If you click on the name of the author, Dr. Richter DasMeerungeheuer, it takes you to a URL with the name BryanS.

The article includes the line, “Linguistic professors at Bob Jones University, long noted for its intellectual rigor…,” so you know right there it’s a joke.

It goes on like this for a while. The writers basically took a page from the Answers in Genesis playbook: If you include a lot of big words and make it sound like actual science, gullible people will believe anything you say.

Which brings us back to your relatives on Facebook. I appreciate the satire and I hate breaking the spell… but I hope anyone who receives a link to this scientific “breakthrough” can write back and debunk it immediately.

June 28, 2014
A Love Note from Neil deGrasse Tyson
Next Post