Earlier this year, the Universal Church of the Kingdom of God in New Zealand ran an advertisement promoting their Healing services: 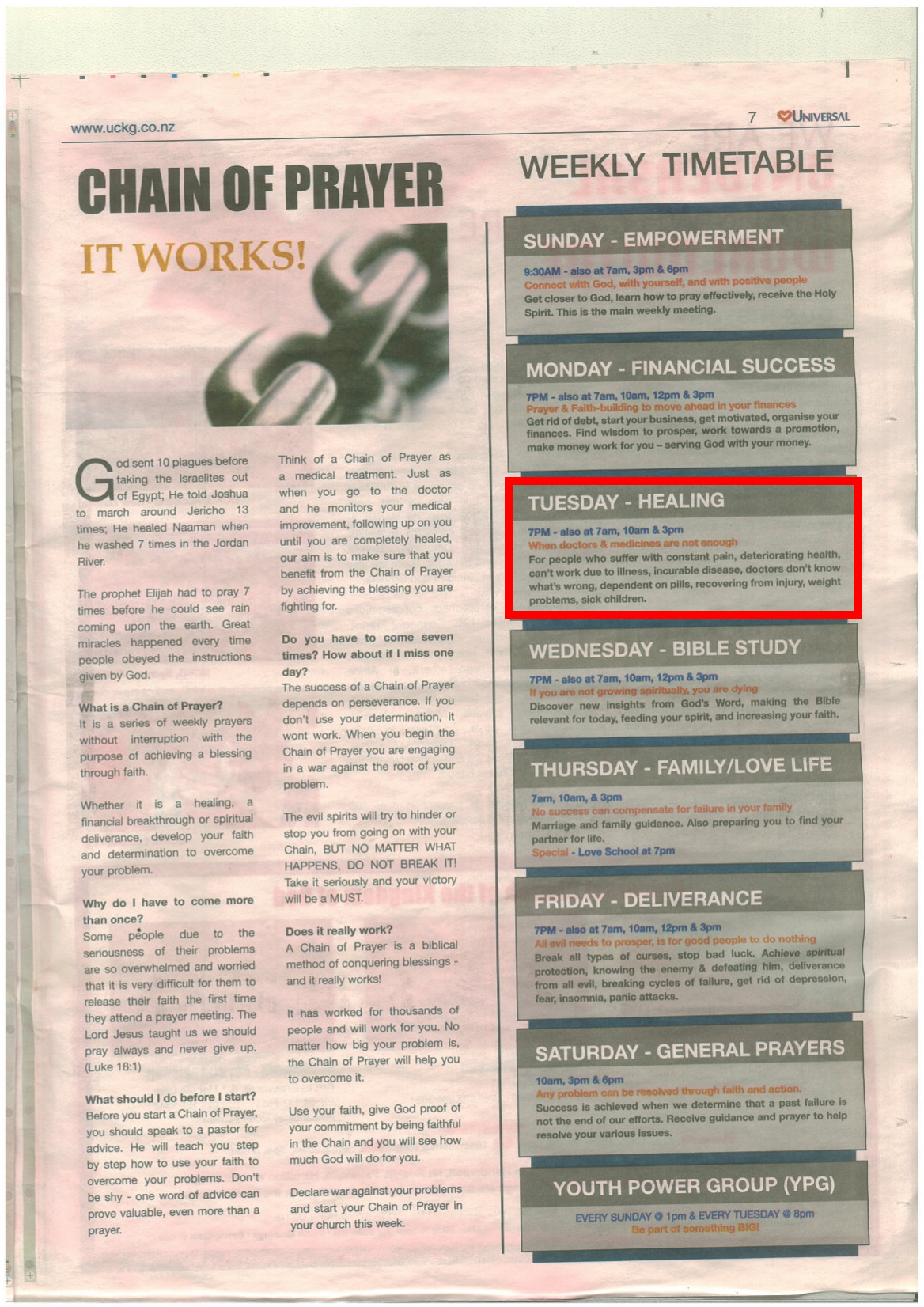 When doctors and medicines are not enough.

The implication is clear: Prayer will help cure your “incurable” diseases! Just come to our healing sessions!

Mark Hanna, co-founder of the Society for Science Based Healthcare, saw that ad and knew full well that prayers didn’t solve any of those problems. More importantly, for the church to suggest otherwise appeared to him to be a case of false advertising. So he filed a complaint with the Advertising Standards Authority, a self-regulated agency that is pretty effective at getting companies to remove or change their ads.

Yesterday, in a stunning display of common sense, the ASA said Hanna was absolutely right:

… the majority of the Complaints Board said the Advertiser had presented their religious beliefs in evangelical healing as an absolute fact, rather than opinion, and may mislead and deceive vulnerable people who may be suffering from any of the illnesses listed in the advertisement. As such the Complaints Board said the advertisement was not saved by the provision for robust advocacy permitted by Rule 11 of the Code of Ethics.

It’s true the ASA can’t force the church to comply with the request to change its ad… but it’s still a strong statement from a respected authority.

In response to the ruling, Bishop Victor Silva of the church basically admitted that their prayers aren’t supposed to do anything so they should be let off the hook:

We do not provide therapeutic, medical or health services or services which claim a therapeutic purpose. We hold prayer meetings, at which the congregation pray about various issues in their lives, including health issues. We are no different from any other Church in this regard. However we believe that God can heal the sick, and it is He who heals. It is not holding a prayer meeting of itself (which is the service that we provide) which may heal somebody — it is a combination of their faith, their prayers and the prayers of others, and God’s mercy. Therefore we consider that the Code does not apply to this article.

What makes this false advertising especially egregious is that it’s not the first time all of this has happened. In fact, just three weeks ago, the Society for Science Based Healthcare complained about the same church to the ASA for a different reason… and the ASA, once again, told the church to stop with the lies:

The direct mail advertisement for the Universal Kingdom of God promoted the “Holy Oil Event” where it would give away bottled of Holy Oil from Israel. The advertisement included testimonials that made therapeutic claims about the Holy Oil’s efficacy on conditions such as tumours, chronic pain etc.

What did Bishop Silva say after the ASA called out the church for its deceptive advertising?

We don’t claim that our holy oil has healing powers but we believe that God can work miracles and that faith in God can result in miraculous healing. The oil itself is not administered for a therapeutic purpose and is not a medicine, and we don’t ever make therapeutic claims about the oil itself — only about God and His mercy and the power of faith.

Let me paraphrase: Sure, we advertised Holy Oil as helping you with your tumors… but what we really meant was that God would heal your tumors. Unless he doesn’t. Which we totally said could happen in the fine print that contradicted our advertisement.

Hats off to the Society for Science Based Healthcare for keeping the church honest since it can’t be trusted to do the right thing on its own.

I asked Hanna why he began alerting the ASA to these ethical violations and he told me this (via email):

I’ve been making complaints, mainly to the Advertising Standards Authority, about misleading health information in advertising for a few years now. It started as an accident, when I emailed them to ask if something in particular was allowed in an ad I’d seen (a chiropractor implying he was a medical doctor), and they interpreted my question as a complaint. That resulted in the ad being changed, so I discovered that making a difference could actually be easy, and since then I’ve continued to make a lot of complaints.

… I complained about this [healing] ad because I think people have the right to make informed choices about their healthcare, and that right is infringed upon when an organisation spreads misinformation like this…

What an awesome activist and a fantastic organization.

June 27, 2014 Gallup Poll: 30% of Americans Say Religion is "Old Fashioned and Out of Date"
Browse Our Archives
What Are Your Thoughts?leave a comment