Gallup Poll: 30% of Americans Say Religion is “Old Fashioned and Out of Date” June 27, 2014 Hemant Mehta

Gallup Poll: 30% of Americans Say Religion is “Old Fashioned and Out of Date”

It’s not the highest percentage on record, but it’s not an insignificant number either: 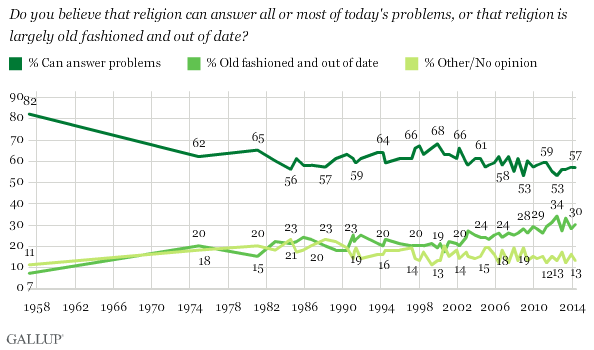 Meanwhile, 57% of Americans believe religion can answer our problems, a number that’s either part of a long downward trend or a recent leveling-off, depending on how you look at it:

Over the past 40 years, there has been a gradual shift in Americans’ views of the relevance of religion in answering today’s problems, with an increasing, but still minority, segment saying that religion is old fashioned and out of date.

The question itself is a broad take on Americans’ views of the relevance of religion in today’s society, and clearly, the 30% who say it is not relevant today differs markedly from the 7% who felt that way in 1957 or the 15% who felt that way in 1981. Still, the majority of Americans continue to believe that religion can answer today’s problems, another indicator that the nation, by far, remains a religious country. And, with the trend leveling off in recent years, it appears this aspect of the secularization of U.S. society may have slowed, if not halted, for the foreseeable future.

When Gallup broke down the numbers by various demographics, they found that 39% of Americans 18-29 agreed that religion was old-fashioned as well as as astonishing 49% of liberals. 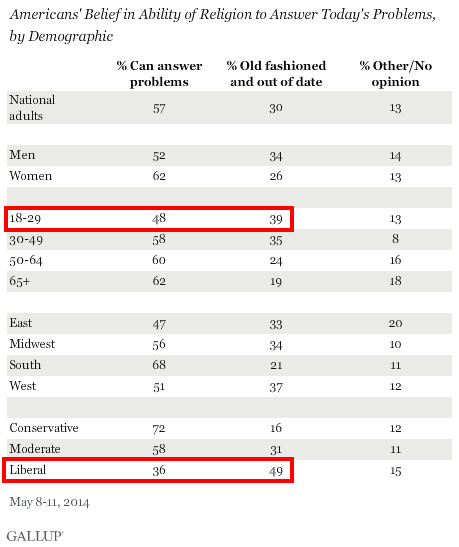 I know it fits the stereotype, but I’m surprised that so many liberals feel that way, compared to only 36% of them who think religion can answer our problems.

It makes you wonder: When are liberal political candidates going to stop pandering to the religious base and pay a little more attention to those of us who don’t find value in faith?

June 27, 2014
New Zealand Church Told to Stop Saying Prayers Have Healing Powers Because It's Not Factual
Next Post

June 27, 2014 Judge Rules Against Public High School Teacher Who Was Promoting Christianity in the Classroom
Browse Our Archives
What Are Your Thoughts?leave a comment