Bob Jones University is a truly troublesome place. From their history as a racist institution to their mishandling of sexual assault on campus to their absolutely insane student code of conduct, BJU has had a lot of negative press. Even when I was growing up in a cult, I knew that BJU was too extreme for me to consider attending. 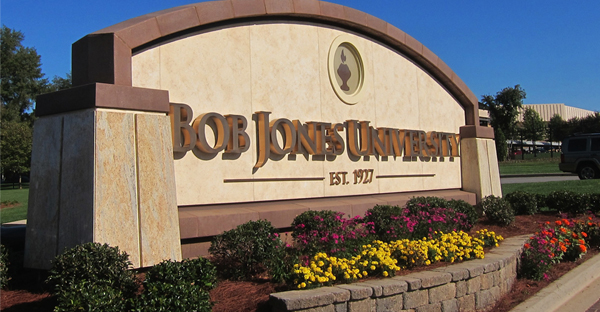 For context, first, check out my friend Dani‘s story about how she got expelled from BJU for having consensual sex with her boyfriend while attending the school. (Below are just a few excerpts from it.)

So, if that’s what happens to an adult student — Dani was 21 at the time — for having legal, consensual sex with her boyfriend… what happens at BJU when you get sexually assaulted?

According to a recent Al Jazeera report, Sarah [a pseudonym] was raped multiple times in 2004 before leaving for BJU, and eventually sought counseling through the college for the trauma.

“I would say that the impact of the two years of counseling I had with her is that I felt like I had been raped all over again,” she said.

In their many sessions, Sarah said [professor of counseling Pat] Berg fixated on her “sin,” and then blamed her when she failed to “get better.” She said Berg told her that she needed to repent of any pleasure she experienced during her abuse. Since BJU doesn’t recognize psychiatric concepts like post-traumatic stress disorder, she said she was also told that she was choosing her trauma symptoms.

“I remember her looking at me and saying, ‘You know that the nightmares are your own fault, because you’re choosing to replay pornographic thoughts in your mind,’” she said.

According to emails, Berg also advised Sarah to call her rapist and ask for forgiveness. Sarah said Berg told her that if she didn’t forgive, God wouldn’t be able to “use her.”

For what it’s worth, Pat Berg said (through a BJU spokesperson) that those allegations were “patently false.” Though an email screenshot from Sarah on the Al-Jazeera site suggests otherwise.

Another student, Julia [also a pseudonym], initially sought counseling for an eating disorder. Pat Berg’s husband Jim Berg, a former dean of students and current faculty member at BJU, told Julia that her disorder was “a lifestyle of sin.” The shaming only got more intense after Julia was raped by a fellow BJU student:

… Seven months later, she says a co-worker and Bob Jones ministry student raped her. She thought of him as “the tool that God used to punish me.”

Within a week, she said Berg found the man responsible and expelled him, but three semesters later, he was allowed to come back. When she expressed her fear to an administrator, Julia said she was asked whether she would really want to prevent a “Godly man” from getting an education that would allow him to “serve the Lord.”

Students were encouraged to initiate conversations with the intent of extending forgiveness to their abusers.

I’ve seen this before in Sovereign Grace Ministries, where children were forced to publicly forgive and hug their abusers and were drilled by their pastors into believing that they were complicit in their abuse. The inability of evangelical leaders to treat victims as victims and abusers as predatory is such a trend that I have lost all ability to register surprise when I hear these stories.

The eating disorder story, too, doesn’t surprise me much. I’ve heard churches teach time and time again that depression and anxiety are sin issues, not mental health problems, and that has extended to postpartum depression, eating disorders, and self-injury. When my younger sister was a student leader on her hall at Jerry Falwell‘s Liberty University, she told me of a girl she knew who got suspended when her self-injury habit was discovered. Both of us were angry that it happened but knew that that’s just “how it is” in evangelical culture.

This is, again (I sound like a broken record), because of the doctrine of sin in the church, where all sin is counted as equal in the minds of the church leaders, because they believe that Jesus would have had to die for any sin — small or big — to appease the [presumed] just wrath of God on mankind. So a child abuser or a rapist is maybe socially worse than a liar or a glutton, but s/he isn’t theologically worse. Often, the pastors in churches who teach this aren’t properly trained in counseling and they prioritize ideology over the victims.

If their own theology holds true, then one can only assume that they will end up regretting this oversight. In the meantime, BJU owes their students — and all of us who care about them — some answers.

June 25, 2014
Nigerian Man Held Against Will in Psych Ward Due to His Atheism
Next Post