On last night’s Daily Show, comedian Bill Maher said something he’s said on his own show many times before: President Obama is a “drop dead atheist, absolutely.” (You can see the full clip at Mediaite, or on the Daily Show‘s own website, whenever they get around to updating it.) 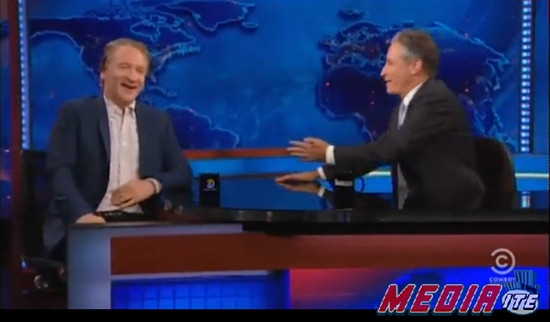 Jon Stewart softly rebutted that line by bringing up the whole Reverend Wright controversy of 2008 — wasn’t Obama a member of that church? — and Maher responded by saying it was only for political purposes and that Obama was a “member” of the church but never really attended services.

Normally when we hear people talk about Obama’s “true” beliefs, we’re referring to right-wing nutcases who believe he’s Muslim. But Maher’s comments echo something I’ve heard from a lot of people that I actually respect. And there’s no reason to let it slide.

The unstated implication from Maher’s perspective is that Obama is too smart to be religious… which is an insult to, well, all the smart people out there who also happen to be religious. His intelligence and academic pedigree is hardly a reason to just assume he’s non-religious. It’s just wishful thinking.

… look, even if [Obama] is an atheist, or anything else for that matter, it doesn’t really matter unless he acts on those beliefs. It’s meaningless to speculate as to whether he’s a “secret atheist” or what have you if he still allows the Faith-Based office to let fund recipients discriminate in hiring, if he appears at the National Prayer Breakfast, or fights on the side of prayer at legislative sessions.

If Obama’s an atheist, then he sure as hell is working his ass off to keep it a secret. As much as I generally support him, we’d all be better off having someone in office who more strongly defended the wall between church and state.

By the way, I made an Atheist Voice video last October about this very topic. It’s sad to see how little has changed since then.

June 24, 2014
The Curator for a New Religious Art Exhibit is a Nonbeliever
Next Post