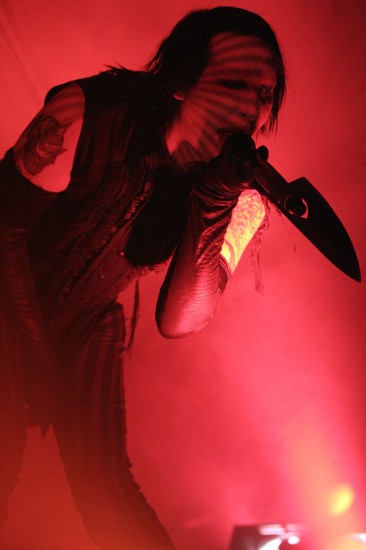 Apparently in Russia it’s 1996 all over again, as conservative religious groups are seeking to ban performances by that new, cutting-edge act, Marilyn Manson.

The source of the complaint seems to be the Russian Orthodox organization God’s Will (that’s not an arrogant name for your group), who are imploring Moscow’s mayor to cancel Manson’s show because of the performer’s “blasphemous” material, according to the Moscow Times.

The organization also said Manson’s performances were “full of elements insulting to the feelings of believers” and promoted “religious hatred, cruelty, murder, suicide, sexual perversion and Satanism among young people, including minors.”

Wow, that’s a lot to pack into one show!

Unlike when the legitimately disruptive band Pussy Riot was arrested, Russia now has a real blasphemy law that could theoretically be enforced against Manson. The only chance to nab him, though, would be for his Moscow show, as other Russian cities where he’s scheduled to tour have already cancelled on him.

Folks in the city of Novosibirsk were apparently afraid for their safety should Manson show up (what, was he going to run loose and attack people in the streets?), and got organized:

On June 11, 400 residents of Novosibirsk demonstrated against Manson’s planned visit to the city. The participants in the protest handed out St. George ribbons, held icons and carried posters with the inscription “Say no to Uncle Manson,” Lenta.ru reported.

I presume their next move will be to ban the Macarena, and demand Alanis Morissette explain the lyrics to “Ironic.”

June 23, 2014 Examples of Pseudoscience You May Have Forgotten to Be Angry About
Browse Our Archives
What Are Your Thoughts?leave a comment