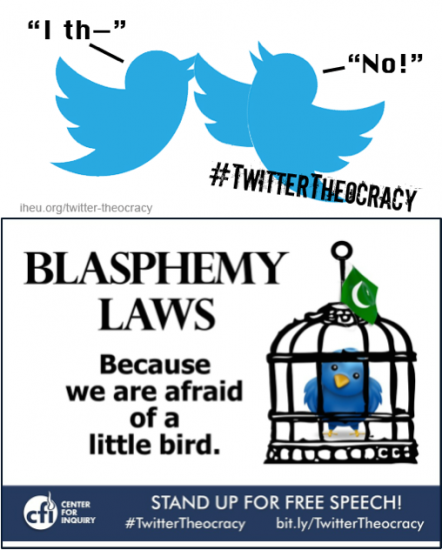 Secular organizations came together last week to support a campaign (going by “#TwitterTheocracy”) that addressed Twitter’s compliance with Pakistan’s request to censor “blasphemous” tweets and Twitter accounts. Or, that’s one way to phrase it. Another might be that secular organizations came together to address the fact that Pakistan was demanding that Twitter censor certain material and block certain users under the aegis of its blasphemy law.

See the difference? One version makes Twitter the campaign’s target. The other makes Pakistan the target. As communications director at the Center for Inquiry, one of the groups that led the campaign (our policy guy Michael De Dora wrote the letter to Pakistan that all the groups signed on to), I saw that the among the several groups involved in the campaign, these two distinct understandings of precisely what we were trying to accomplish existed. Some, if not most folks taking part focused their attention and their tweets on Twitter for agreeing to censor the content, while we at CFI focused on Pakistan, and left Twitter mostly alone.

I wrote about why in a post at the CFI blog, and rather than re-write it, I thought I’d take this opportunity, where I’m subbing for Hemant as your friendly atheist for a few days, to quote the meat of the piece. I compared Twitter’s dilemma to that of Google’s when it opened up shop in China under a lot of restrictions that angered free expression advocates:

Twitter likely saw this kind of compliance as a price of being able to do business and make its service available in Pakistan and other parts of the Muslim world. It was only weeks ago that Turkey’s Prime Minister was threatening to “eradicate” Twitter!

I also note how Twitter did not try to hide the fact that it was censoring material at the behest of Pakistan:

While complying with Pakistan’s censorship requests, Twitter reported each incident to the website ChillingEffects.org, offering a degree of transparency to the rest of the world as to what it was being compelled to do.

A few days ago, Twitter decided to unlock those accounts and reveal the censored content again. That’s great! But the choice that faced Twitter when it first blocked the content, and when it reversed itself, was and is a very difficult one: whether to block some content in Pakistan, or risk being shut out of the country entirely. I wrote:

While [being shut out of Pakistan] would be bad for Twitter, it would also be pretty bad for people in Pakistan who use Twitter as a prime engine for communication, activism, and dissent. So as with Google in China, which is better? A censored Twitter in Pakistan, or no Twitter in Pakistan?

Perhaps no one will have to make that choice, and Pakistan will find it more valuable to allow Twitter to operate as it should without restriction. That’s the outcome we at CFI are working toward, which is why we decided not to pile on Twitter during the #TwitterTheocracy campaign, but instead focus our ire on Pakistan and its censorship and blasphemy laws.

This is not to let Twitter itself off the hook, for as I note in the piece, they have to answer for whatever choice they make, no matter how difficult that choice is. So it’s important to note that neither I nor CFI think the other groups and individuals who concentrated their efforts on Twitter were wrong to do so.

Just see the images to the right, one made by CFI’s close friends allies at the International Humanist and Ethical Union on top, and below that one from us. IHEU’s, which is awesome, focuses on Twitter’s actions, ours on Pakistan’s. On its website, IHEU encourages folks to “speak up about how Twitter has chosen to side with theocratic regimes instead of those who are trying to resist those regimes.” That’s damning of Twitter, and pretty damned compelling.

But at the same time, we also think that Twitter’s actions, whether they’re craven or principled or defensive, were one more tragic result of a greater threat to free expression: Pakistan’s blasphemy laws. They’re simply wrong, and they need to change.

June 21, 2014
The People Who Are Most Militant About Using Up Fossil Fuels...
Next Post