Remember the Dayton, Ohio public-bus driver who, in February, was assaulted by three teenagers? Rickey Wagoner‘s assailants supposedly fired three shots at him, point blank, and stabbed him for good measure. The story made national news because Wagoner told everyone his survival was a bona fide miracle: two bullets aimed at his chest never penetrated the Bible that he happened to carry there. Praise the Lord! 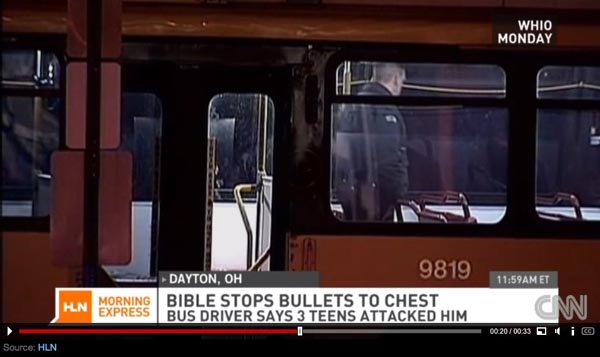 Just like the bulk of the stories in Wagoner’s favorite book, his account of the attack turns out to have been nothing but a fanciful fabrication (I guess the man doesn’t believe in the Biblical commandment that prohibits bearing false witness).

A video and audio recording of the incident by a device aboard the bus showed Wagoner had only 22 seconds to disarm two of the assailants, stab one of them with his own pen knife, fire at them with the bullets remaining in the handgun he said he had wrestled away from one of men, and travel 200 to 300 feet to get back on his bus. He then radioed in to the dispatcher, but did not appear to be out of breath or winded, [Dayton Police Chief Richard] Biehl said, or having just been involved in a life-or-death struggle.

Additionally, Wagoner said a religious book stopped two of the bullets fired at him. Two bullets were found lodged in the book titled, “The Message,” which is a modern translation of the Bible that was inside Wagoner’s shirt pocket. Biehl said it’s “not credible” that bullets were fired into the book without penetrating the torso. … Police ballistics tests showed that bullets fired from the handgun — a 25-caliber Raven model semiautomatic — at the same distance as had been fired at Wagoner’s book penetrated the book and traveled 15 inches through a gel designed to simulate the effect of bullets on a human body.]

Biehl also said Wagoner’s injuries were not consistent with defensive wounds, but were consistent with hesitation wounds. Alongside a deeper wound were shallower, smaller cuts. The knife Wagoner said he used to stab one assailant was never recovered.

Wagoner owes the city of Dayton more than $100,000 in property taxes, Biehl said. The Chief speculated that the bus driver may have planned to enrich himself by inventing a tale that, in a country where religious bullshit sells like hotcakes, might have conceivably made him the next Todd Burpo.

Remarkably, the cops do not intend to file charges against the bus driver for his false statements; and all that the city of Dayton has done so far is suspend Wagoner — with pay.

I suppose we’ll never know if the authorities would treat Muslims or atheists who are guilty of similar infractions with such leniency and consideration.

June 20, 2014
Pastafarian Advice: Wearing a Colander on Your Head Is Amusing on a Driver's License, Not So Much on a Gun License
Next Post

June 20, 2014 Religious Home-Schooling Parents in Virginia Aren't Regulated At All, but One District is Trying to Change That
Browse Our Archives
What Are Your Thoughts?leave a comment