Pagan Forbidden from Opening Temple in Beebe, Arkansas Because His God Isn’t the Christian God

When Bertram Dahl told Beebe, Arkansas Mayor Mike Robertson that he wanted to build a church and goods shop in the garage in his backyard, Robertson was very supportive:

The mayor was very nice to us and welcomed us and even gave us useful information, such as the local utilities we would need to contact. He even sold us three couches from his furniture store to put in the new home.

When Robertson found out Dahl (below) was, in fact, a Pagan High Priest, his support faded quickly: 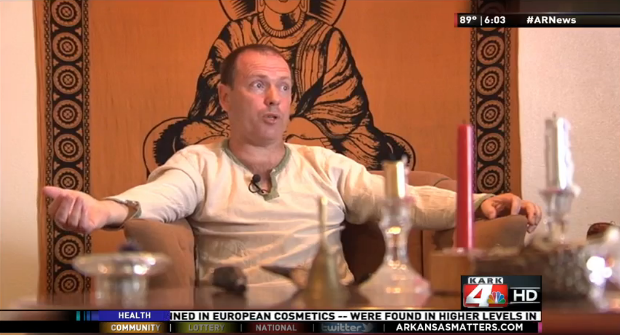 “We were basically given a cease and desist you know — shut down. We hadn’t even unpacked. We aren’t even open — how are we getting this,” [Dahl] said.

The order was issued the same day the city’s code officer receive a letter from Mayor Mike Robertson, expressing his opinion no conditional use or special use permits should be issued on Dahl’s property for a worship place or shop. Dahl hadn’t even applied yet.

Dahl claimed he also reached out to his alderman regarding city policy, but when we spoke to the alderman, the only comment he wanted to make on the record was “that man’s God isn’t my God.”

If that was the on-the-record comment, what the hell was he saying off the record?!

Dahl’s (unconfirmed) personal version of the story sheds even more light on the extent of the discrimination at play:

… When we told him we wanted to talk to the town counsel about this, he told us that if we showed our face at the town meeting, we would not be on the docket and we would not be heard. We told the mayor that this seemed like Religious Persecution and he responded with “I don’t care, it’s not going to happen”…

On 2014 Mar 14 we decided to go to City Hall and officially ask for the permit. We had been turned down without even applying, but we thought we would officially apply anyway. The secretary called the mayor and said on the phone “He is standing right here in front of me”. And after a few moments of listening to him, she hung up and told me the mayor said “We will not be granting any permit of any kind to you”. We were then informed (though they would not put it in writing) that we could not have any application, that there would be no permit of any kind for us and that we could not speak with the city attorney as previously promised.

What’s really unbelievable is that, if these stories were untrue, the mayor could easily just get on camera and say there’s no religious discrimination at all. Pagan temples are welcome in the town, just as all churches are welcome. Instead, the mayor said (off camera) that there was no permit Dahl could apply for — even if the goods shop he wanted to open up was forbidden, the church wasn’t an option either. For reasons that only make sense if you use #ChristianLogic.

As far as I know, no churches in the area have come out in support of Dahl. No lawsuit has been filed either.

June 19, 2014 High Court of Australia Invalidates Federally-Funded School Chaplaincy Program
Browse Our Archives
What Are Your Thoughts?leave a comment