Just before getting the nomination, MacDonald explained how she would make decisions: Forget the law. It’s all about the Bible: 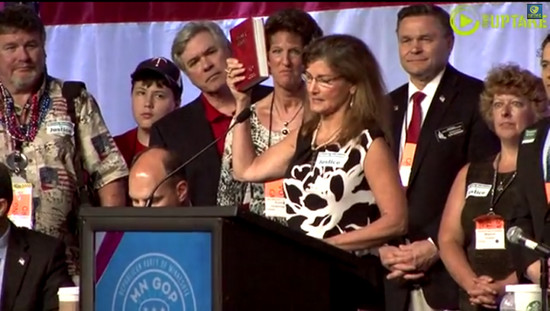 When judges used to enter the courtroom, they would hold the Bible over their head, like this.

In the words of George Washington, it is impossible to rightly govern the world without God and the Bible.

She’s a bad historian, too. There’s no evidence whatsoever that Washington said that. (Even Christian pseudo-historian David Barton, who popularized that lie in the first place, later admitted there was no proof he said it.)

She’s like a female version of Alabama’s Chief Justice Roy Moore, who installed a Ten Commandments monument right in the courthouse. (But with a DUI charge.)

She said later in her speech that she would be “committed to civil liberties, constitutional rights, human dignities, and fair treatment of all citizens children or adults.” Though I wonder if she would’ve applied those principles to gay couples if the state hadn’t legalized marriage equality last year…

The documents also contained information about a bizarre incident in 2013 where MacDonald, who was representing a client in court, was removed from the courtroom by deputies and placed in a cell.

That’s who the GOP just nominated to the highest court in the state.

Michele Bachmann will be proud, I’m sure.

(Thanks to Roger for the link)

June 19, 2014
In Town Where Supreme Court Case Originated, Atheist Will Deliver Invocation at Greece (NY) Board Meeting
Next Post