A New Website for Atheists Who Have Suffered the Death of a Loved One June 19, 2014 Hemant Mehta

In 2011, after dealing with the loss of her three-month-old son and the typical reactions she received from well-meaning friends and family members, atheist Rebecca Hensler began a Facebook group called Grief Beyond Belief: 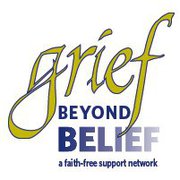 “I quickly found a network of parents who were also grieving the deaths of their children at The Compassionate Friends (a 42-year-old parental grief support group). But I often felt alienated by assurances from other members that my son was in heaven or by offers to pray for me, comforts that were kindly meant but that I do not believe and cannot accept. It wasn’t until an atheist member reached out to me in friendship that I understood what I had been missing.”

That group now has more than 10,000 Likes and Rebecca is ready to take it to the next level. Today, Grief Beyond Belief is moving to its own website, where there are far more resources for those who need it:

The website will also feature forums in which members can share thoughts, feelings and stories, seek and offer comfort and advice, and post tributes to the loved ones they are grieving. Sub-forums include: grieving while recovering from religion, specific losses such as babyloss or suicide, and dealing with religion and the religious, as well as certain topics that have not been considered appropriate for the Facebook support group, such as debate about death and grief.

I hope I never have to use it… but I’m relieved and thankful to Rebecca for putting it together for that inevitable moment when it becomes necessary.

June 19, 2014
Jason Heap, Atheist Candidate to Become a Chaplain in the U.S. Navy, Gets Rejected
Next Post