This June, on top of the usual Pride Week festivities that culminate in downtown Toronto’s Pride Parade, the city of Toronto hosts World Pride 2014, an annual international festival celebrated in a different city each year to highlight the culture, achievements, and activism of the world’s LGBTQ people as they strive for full legal and social equality. 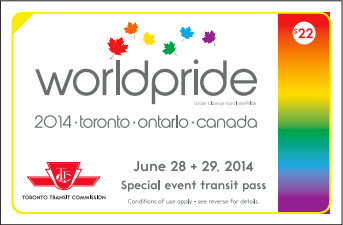 Only three cities have been World Pride hosts thus far — Rome, Jerusalem, and London — and Toronto expects World Pride to bring more than $130,000,000 of tourism dollars into the city. So it’s kind of a big deal.

Specifically because of World Pride, teachers in the Ontario English Catholic Teachers’ Association (OECTA) voted to “have a presence in the parade in support of students, teachers, and others in the LGBT community,” according to OECTA president James Ryan. Explaining the group’s convictions, he spoke of “trying to stand in solidarity with a group that is quite marginalized” and “their right to be free from bullying and harassment.”

OECTA has not been an official part of past Pride parades, though they have appeared as a presence on the street fair before. Naturally, individual members of OECTA are free to decide whether they wish to participate in the parade as part of the OECTA marching contingent or not, and may express approval or disapproval of how their colleagues have collectively voted to support participation.

That’s not good enough for some critics of OECTA’s decision, who want the union as a whole to take a position more in line with the Catholic Church’s position on homosexuality.

The major activist group speaking out against OECTA’s decision is Parents As First Educators (PAFE), a Catholic organization that has been involved in controversies over LGBT issue in the past, including during the controversy over gay-straight alliances (GSAs) in Catholic schools. According to PAFE president Teresa Pierre, “the concern with this is just that it’s further involvement of the schools in an official capacity with the promotion of ideals that run counter to the Catholic message on homosexuality.”

PAFE has created a petition to school-board trustees, who Pierre calls “the legal guarantors of the faith,” to block their teachers from participating in the parade, a decision that may differ from one jurisdiction to the next. One Halton trustee, Anthony Danko, wanted to develop “remedial and punitive actions” to take against OECTA, whose actions “offer scandal to the Catholic community”; his motion did not survive.

Toronto’s Bishop Thomas Collins has spoken up to support PAFE’s position and argues that the union has overstepped its boundaries in this case:

Its competence is limited to collective bargaining, and the services any union provides to its members. When it goes beyond those areas, it can easily go wrong, as it has in the decision of the OECTA delegates to participate in this event. This decision shows that they and the OECTA leadership have an inadequate and mistaken understanding of their faith.

Collins has made token calls for Catholics to be compassionate towards gays “in harmony with the gospel,” but he echoes Pierre’s concerns when he says he considers the Pride festivities an inappropriate venue for displaying that compassion and understanding:

I find it very troubling and strange that [the union] would choose this particular event as a way of expressing that, when it seems to be going completely against what we believe in many ways. That’s the point at which I would say, ‘Really? What are you thinking?’”

Teresa Pierre would echo that sentiment, calling the Pride parade unsuitable for families and Catholic organizations based on its (extramarital) sexual content, condom distribution, and permissive attitudes in general:

[The Pride event] breaks nudity laws, and participants promote homosexual activity, instead of sex in marriage, and simulates extreme behaviour like sadomasochism, which demeans the roles of men and women in loving relationships.

In response to these criticisms, Ryan had this to say:

I understand that some of the bishops are unhappy with our participation in the parade. I think they see the parade as something different than we see it as. I think they probably see it as an affirmation of a way of life, whereas we would see it as a parade that celebrates diversity, and also a parade that speaks out against the discrimination that members of the GLBT community have traditionally suffered.

He goes on to indicate that he believes in the Church’s teachings on chastity both within and outside of romantic relationships and does not find OECTA’s support of World Pride to contradict those values.

June 18, 2014
New Reality Show in Which Chosen Participants Agree to Marry at First Sight Will Feature Humanist Chaplain
Next Post