New Survey Shows More Than Half of Britain Has No Religion June 18, 2014 Hemant Mehta

New Survey Shows More Than Half of Britain Has No Religion

This is pretty shocking information. I knew the religious trends in Britain were going in a non-religious direction for younger citizens, but I didn’t think “No Religion” would cross the 50% threshold so quickly for the whole population.

Yet, that’s what the 31st annual British Social Attitudes survey concluded in a report published yesterday: 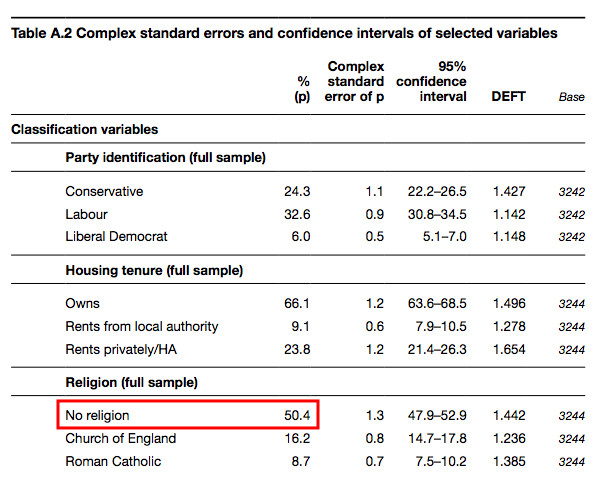 A record low 41.7% of Brits labeled themselves some version of Christian.

The news comes on the same day Prime Minister David Cameron pulled an America and attended a National Parliamentary Prayer Breakfast, where he maintained that Britain was a “Christian country.” (The survey, by the way, also showed that only 24% of British people believe being Christian is important to their national identity, which makes Cameron’s claim very dubious indeed.)

The British Humanist Association’s Chief Executive Andrew Copson was quick to point out the ramifications of the findings and how society should adapt:

… The truth of the matter is that we are a diverse society bringing together individuals and influences from Christian, other religious and non-religious backgrounds and that diversity is something that we should celebrate. Trying to label the whole nation with one religion fosters alienation and division.

It is time that the Government wakes up to the policy implications of this and stops giving bishops privileged places in the House of Lords, stops funding ever more religious schools and requiring every school that is not religious to have a daily act of Christian collective worship.

Religion is losing its power and faith leaders will do everything they can to hold onto it. Now, we just need more of those British “Nones” to speak out and hasten the demise of irrational/faith-based thinking.

June 18, 2014 A Church, Seemingly Doubling as a PAC, Endorses a Republican Candidate. So Why Is It Still Tax-Exempt?
Browse Our Archives
What Are Your Thoughts?leave a comment