The law is pretty straightforward when it comes to prayers at public school graduations: You can’t have them. That means school officials can’t lead them (even if they’re sneaky about it). And student speakers can’t lead them, either. At least not with the knowledge of the administrators.

We’ve seen schools try to work around those guidelines by letting students vote to have a prayer (still illegal) or not screening students’ speeches beforehand (which is just asking for trouble). 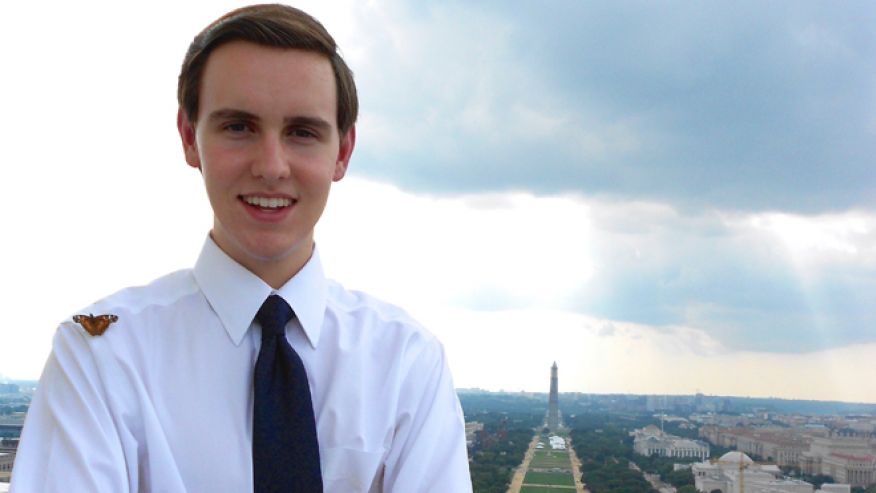 “Heavenly Father, in all times, let us always be kind to one another, tenderhearted, forgiving one another, as God in Christ has forgiven us.”

It’s the same response they would’ve (and should’ve) had if a student wrote, “Let’s remember that we worked hard to make it to this day… and Jesus Christ had nothing to do with it.”

So Hamby submitted another draft that included this setup for a prayer:

“Certain interpretations of the law, school policies and conditions have stifled my ability to speak freely to you this evening and prohibited me from doing otherwise,” he wrote. “However, if I could pray with you this evening, I would say something along these lines.”

School officials said no to that, too. As they had to if they wanted to avoid a lawsuit.

They went back and forth a couple more times — Hamby kept throwing in religious references — but the school made it very clear that Hamby could not pray during his speech. They even said they would cut his mic if he tried and then make an announcement to the crowd that Hamby’s views didn’t reflect that of the district.

(Serious questions: How did Hamby became salutatorian when he clearly didn’t pass a Government class? Is he blissfully unaware of the law or does he just not care?)

On graduation night, Hamby went ahead and recited a Christian speech anyway:

So I will leave you with this, with a quote from the biggest best-selling book of all time in history: “You are the salt of the earth. But if the salt loses its saltiness, how can it be made salty again? It is no longer good for anything, except to be thrown out and trampled underfoot.” Be the salt of the earth, be strong and stand for your convictions and stand for what is right, what is ethical, what is moral and Godly, no matter what is the cost to you.

… May the God of the Bible bless you, each and every one of you, every day in the rest of your lives.

I’m not offended by that, by the way. I just think he’s arrogant.

But there’s your insight into Hamby’s character. He’s a student who doesn’t give a damn about his fellow classmates if they’re non-Christian. He thinks the school officials were oppressing him when they were just following the law (because they must have known they would lose money in the inevitable lawsuit if they green-lit the speech). He thinks it was a violation of his conscience to speak about his faith when, really, the same rule would’ve applied to anybody in his position.

(I guess Jesus didn’t love him enough, considering someone else was the valedictorian…)

As you can imagine, Todd Starnes, the Fox News writer who loves to make up stories about “religious discrimination,” was all over this:

Brooks is still coming to terms with the national attention generated by his thoughtful act of defiance. He told me that it’s important for Christians to take a stand.

“I would tell young Christians to be bold and always speak with gentleness and kindness, to leave the sweet taste of Christ in their mouths, allow them to want and search for more,” he said.

It’s truly stunning to think that in this progressive age of thought and reason, a young man like Brooks Hamby might be considered to be a dangerous religious radical whose voice must be silenced by agents of the government.

What Starnes and Hamby don’t understand is that there are times when it’s inappropriate to talk all about your personal beliefs regarding crispy, crunchy, delicious Jesus. When you’re at a public school function attended by students and their family members who aren’t all Christian, talking about how correct your faith is isn’t kind or gentle. It’s just a combination of ego and martyr-complex.

(Plus, you *know* the same crowd applauding Hamby would’ve lost their shit if anyone gave a speech about Islam or atheism.)

Just to be clear, what he did wasn’t courageous. Not even close. You don’t need to be brave to make references to Christianity when the majority of the audience already agrees with you.

It does, however, take maturity to realize that there are others out there who disagree with you — and a graduation ought to be a time to celebrate everyone’s accomplishments instead of opening up about your personal theological views.

Hamby may have a high GPA, but he lacks wisdom and empathy.

June 18, 2014
This is How You Can Help the Atheist Who Uncovered Multiple Constitutional Violations at His High School
Next Post

June 18, 2014 New Survey Shows More Than Half of Britain Has No Religion
Browse Our Archives
What Are Your Thoughts?leave a comment