Yes, There Are Republican Atheists Out There. Here’s Why I’m One of Them June 16, 2014 Hemant Mehta

Yes, There Are Republican Atheists Out There. Here’s Why I’m One of Them

This is a guest post by Andrew L. He is a 40-something business consultant, former Christian, current atheist, and mountain biker. He lives in Denver.

I’ve learned that it’s best to sit out some discussions when they come up on atheist websites or at conventions. I was silent through the arrival and departure of Edwina Rogers. I only quietly cheered when American Atheists’ Dave Silverman went to CPAC (albeit unsuccessfully) to reach out to conservatives. I didn’t respond when atheists piled on a fellow non-believer who said she was pro-life, though I at least in part agree with her. But, after reading the excerpt from CJ Werleman‘s Atheists Can’t Be Republicans: If Facts and Evidence Matter, I have to speak up. 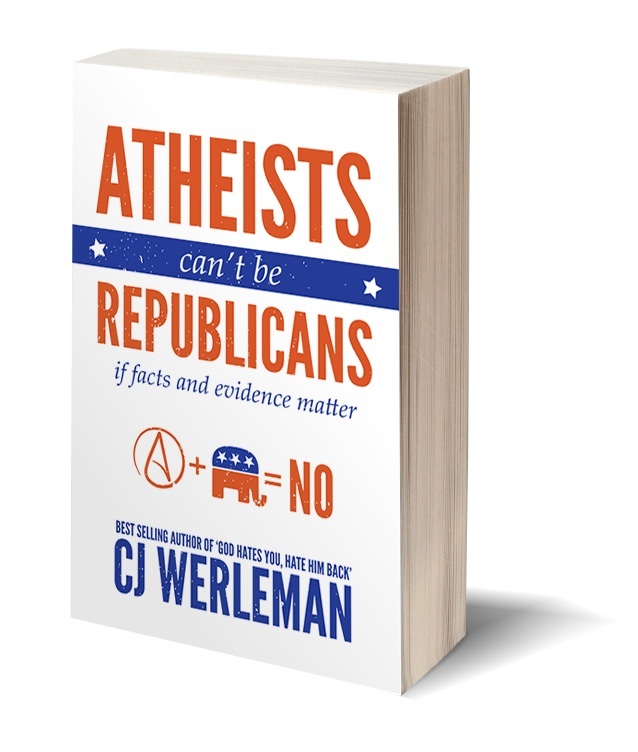 His thesis is clear in the title. Like Werleman, I’m a bit of a political junkie; I watch C-SPAN, read political biographies, and attend my party’s neighborhood caucuses. While there are Republicans I won’t vote for because they are too theocratic, I agree and endorse most of the political philosophy of my party. As far as facts and evidence, I don’t see things the same way Werleman does.

Werleman, at least in his introduction, touched on a lot of topics he believes support his position. Here is my perspective on a few of those:

So it seems that if we look at policy and effects, it’s not quite the slam-dunk for atheists to be anti-Republican that Werleman would lead us to believe. You don’t have to agree with me — I suspect most of you don’t — but you have to acknowledge that one can hold conservative views while also not believing in a higher power. I’m all for a debate on the issues I just mentioned, but I don’t think there’s a debate to be had about whether atheists can be Republicans. They can. End of story.

I’m a Republican because their philosophy resonates with me. I believe they are more on the side of personal freedom and a restrained government than is the Democratic party. I believe economic growth and societal progress happen best in this environment. I believe that there are economic laws that are as immutable as scientific laws. I am for a strong defense as I believe this is ultimately the best option both in terms of resources and humanitarian costs.

Of course, the Christian/evangelical bend of the GOP is my gravest concern with my party and I don’t mean to minimize its effects. But I also think the secular side will eventually win out. We see this in the grand harrumphing heard by those defending prayers at government meetings and graduations. They stick it to us atheists at the next event with an overwrought prayer that somehow disappears from future agendas and programs as unworkable. Those in my party will eventually make the connection that their religious freedom is best protected when they protect the religious freedoms of others. In the meantime, the courts seem to be doing an adequate role at protecting our freedoms.

I admit my party is not always right and we find better results when we split the differences with our Democratic “adversaries.” And I wonder if the same isn’t also true in protecting Democrats from their own versions of hubris. Having two parties is the peer-review of politics.

I embrace my minority status as an atheist among Republicans and as a Republican among atheists. My existence, and that of other atheist Republicans, shouldn’t be dismissed as unthoughtful or illogical.

Andrew previously wrote for this site about his day at a Christian apologetics conference. The opinions expressed here are his own.

June 16, 2014
Justice Prevails: Supreme Court Will Not Hear Case of School District That Held Graduation at a Christian Church
Next Post