Justice Prevails: Supreme Court Will Not Hear Case of School District That Held Graduation at a Christian Church

In July of 2012, the 7th U.S. Circuit Court of Appeals ruled that the Elmbrook School District in Brookfield, Wisconsin violated the First Amendment when it held its graduation ceremonies in Elmbrook Church (an evangelical, non-denominational Christian church) from 2000 to 2009.

That’s not necessarily a Constitutional violation. Sometimes, it’s the only available space in a community large enough to fit a lot of people. It’s okay as long as there’s no overt proselytizing and all efforts are made to minimize the pro-Christian symbols and literature. But, in Brookfield, other venues were available, and this turned out to be a Jesus-pushing, giant-cross-right-on-stage graduation venue.

At graduations, parents and children sit in pews filled with Bibles and hymnals, “Scribble Cards for God’s Little Lambs” and church promotional cards that ask them whether they “would like to know how to become a Christian.” The church’s lobby is filled with evangelical pamphlets and postings, many of which are aimed at children and teens.

Americans United for Separation of Church and State ended up filing a lawsuit and a lower court ruled against them. So AU appealed to a three-judge panel at the Appellate Court. In September of 2011, two of the three judges agreed that the district did nothing wrong.

So the last option was to ask for an en banc review of the case by all the judges at the Appeals Court, including the three who had already heard the case. That motion was granted (which doesn’t always happen) and that’s where the bombshell ruling came from. The 10-judge panel ruled 7-3 against the district, saying it was wrong to hold its graduation ceremonies inside that church.

Check out these excerpts from the ruling (which is worth reading in full):

Here, the involvement of minors, the significance of the graduation ceremony, and the conditions of extensive proselytization prove too much for the District’s actions to withstand the strictures of the Establishment Clause.

The District admits that Church members manned information booths that contained religious literature during the 2009 graduation, and a DVD recording of the 2002 ceremony shows people staffing these tables. The District also admits that during the 2002 ceremony, “Church members passed out religious literature in the lobby” although neither the District nor the Does divulge further details about how the distribution took place or at whose behest. According to Doe 1, when he attended his older sibling’s graduation, “[m]embers of the church, instead of school officials, handed out graduation materials during the ceremony.”

We conclude that conducting a public school graduation ceremony in a church — one that among other things featured staffed information booths laden with religious literature and banners with appeals for children to join “school ministries” — runs afoul of the First Amendment’s Establishment Clause as applied to the states via the Fourteenth Amendment’s Due Process Clause.

In this case, high school students and their younger siblings were exposed to graduation ceremonies that put a spiritual capstone on an otherwise-secular education. Literally and figuratively towering over the graduation proceedings in the church’s sanctuary space was a 15- to 20-foot tall Latin cross, the preeminent symbol of Christianity.

True, the District did not itself adorn the Church with proselytizing materials, and a reasonable observer would be aware of this fact. But that same observer could reasonably conclude that the District would only choose such a proselytizing environment aimed at spreading religious faith — despite the presence of children, the importance of the graduation ceremony, and, most importantly, the existence of other suitable graduation sites — if the District approved of the Church’s message.

Once the school district creates a captive audience, the coercive potential of endorsement can operate. When a student who holds minority (or no) religious beliefs observes classmates at a graduation event taking advantage of Elmbrook Church’s offerings or meditating on its symbols (or posing for pictures in front of them) or speaking with its staff members, “[t]he law of imitation operates”… and may create subtle pressure to honor the day in a similar manner… The only way for graduation attendees to avoid the dynamic is to leave the ceremony. That is a choice… the Establishment Clause does not force students to make.

The best part of the dissenting opinion may be where a judge tries to argue that holding a graduation ceremony in a church isn’t coercive at all:

Elmbrook Church is full of religious symbols — but any space is full of symbols. Suppose the School District had rented the United Center, home of the Chicago Bulls and the Chicago Blackhawks. A larger-than-life statue of Michael Jordan stands outside; United Airlines’ logo is huge. No one would believe that the School District had established basketball as its official sport or United Airlines as its official air carrier, let alone sanctified Michael Jordan. And if the District had rented the ballroom at a Hilton hotel, this would not have endorsed the Hilton chain or ballroom dancing.

Of course, neither the United Center nor the Hilton chain makes it part of their mission to evangelize basketball or dancing… Evangelical Christians, on the other hand, want to make converts out of everybody.

The district’s school board, as expected, voted to appeal that ruling by asking the Supreme Court to overturn it.

They said they had attorneys who would work for free for them, but added that it would cost taxpayers no more than $15,000, money that should have gone toward the education of students but was instead being thrown away to see if school-sponsored ceremonies in openly religious venues were ok.

For what it’s worth, it didn’t even matter how this case would be ruled. After 2009, the district’s graduation ceremonies were held in a new fieldhouse, so Elmwood Church was no longer needed for their ceremonies.

And that brings us to today’s good news: The Supreme Court has denied hearing the case: 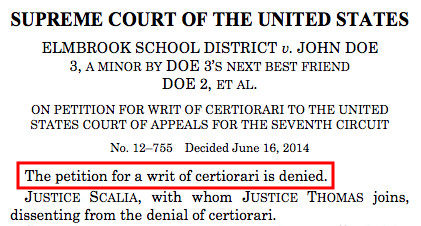 Unlike all the other denials they issued today, this one comes with a strong rebuke from the court’s most conservative judges — Antonin Scalia and Clarence Thomas — who presumably wanted to hear the case and vote in favor of the district, but failed to convince two other justices to give it any more consideration.

In their joint dissent, Scalia compares sitting in a church you don’t want to be in to hearing nasty, nasty rock music:

Some there are — many, perhaps — who are offended by public displays of religion. Religion, they believe, is a personal matter; if it must be given external manifestation, that should not occur in public places were others may be offended. I can understand that attitude: it parallels my own toward the playing in public of rock music or Stravinsky. And I too am especially annoyed when the intrusion upon my inner peace occurs while I am part of a captive audience, as on a municipal bus or in the waiting room of a public agency.

Riiiight. Because having to listen to annoying music at the DMV (when you’re free to break out an iPod and listen to whatever you want, and no one would think any less of you) is just like being taught about Jesus when your family member is graduating.

Scalia uses the Court’s recent ruling in Town of Greece v. Galloway to support his argument:

… In this case, it is beyond dispute that no religious exercise whatever occurred. At most, respondents complain that they took offense at being in a religious place… Were there any question before, Town of Greece made obvious that this is insufficient to state an Establishment Clause violation.

It may well be, as then-Chief Judge Easterbrook suggested, that the decision of the Elmbrook School District to hold graduations under a Latin Cross in a Christian church was “unwise” and “offensive”… But Town of Greece makes manifest that an establishment of religion it was not.

You can see how Scalia is already using the precedent he helped set to push religion in other areas of public life. In his mind, because prayer is perfectly fine at government meetings now, then there should also be no problem with a public school graduation taking place at a church where proselytizing occurs. (Except, in the latter case, minors are involved, and you can’t just quietly avoid the prayers.)

Americans United, as you can imagine, is thrilled with the decision (Scalia’s dissent notwithstanding):

“There was no need for the U.S. Supreme Court to take this case,” said Barry W. Lynn, executive director of Americans United. “The matter was resolved correctly by the court of appeals. This case should serve as a warning to public schools that it’s not appropriate to hold important ceremonies like graduation in a religious setting.”

“No student should ever be forced to choose between missing their own graduation and attending that seminal event in a proselytizing environment inundated with religious icons and exhortations,” said Alex J. Luchenitser, Americ