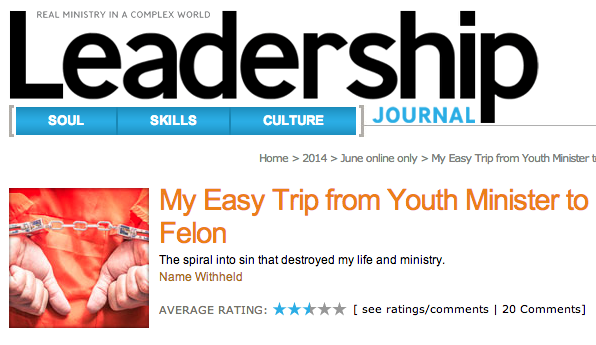 The piece, written by an anonymous sex offender who was also a former pastor, neglected to share the fact that his victim was a child until close to the end of the piece. It was also implied that their “relationship” was consensual and that what the rapist did was a result of “sin” and not his own actions. A member of the editorial team even defended the post online as merely a “cautionary tale.”

The first attempt at fixing the mistake was just appending an editor’s note to the beginning of the piece and changing words in the article. Libby Anne, who does a nice job of highlighting the problems with that here, wrote, “Editing some of the language rather than removing the piece is like putting a bandaid over a gushing wound.”

Late Friday night, unable to contain the firestorm, Marshall Shelley (editor of Leadership Journal) and Harold B. Smith (president and CEO of Christianity Today International) issued an apology for publishing the piece. They took down the article (more on that in a moment) and pledged to do better in the future:

We should not have published this post, and we deeply regret the decision to do so.

The post, told from the perspective of a sex offender, withheld from readers until the very end a crucial piece of information: that the sexual misconduct being described involved a minor under the youth pastor’s care. Among other failings, this post used language that implied consent and mutuality when in fact there can be no quesiton [sic] that in situations of such disproportionate power there is no such thing as consent or mutuality.

The post, intended to dissuade future perpetrators, dwelt at length on the losses this criminal sin caused the author, while displaying little or no empathic engagement with the far greater losses caused to the victim of the crime and the wider community around the author. The post adopted a tone that was not appropriate given its failure to document complete repentance and restoration.

There is no way to remove the piece altogether from the Internet, and we do not want to make it seem that we are trying to make it disappear. That is not journalistically honest. The fact that we published it; its deficiencies; and the way its deficiencies illuminate our own lack of insight and foresight, is a matter of record at The Internet Archive (https://web.archive.org/web/20140613190102/http://christianitytoday.com/le/2014/june-online-only/my-easy-trip-from-youth-minister-to-felon.html).

Any advertising revenues derived from hits to this post will be donated to Christian organizations that work with survivors of sexual abuse. We will be working to regain our readers’ trust and to give greater voice to victims of abuse.

We apologize unreservedly for the hurt we clearly have caused.

As far as apologies go, that seems pretty genuine and heartfelt… even if they had no choice but to write it. Giving the ad revenue to groups that work with abuse victims is the right thing to do.

My only problem is that they took down the piece.

I know critics were using the Twitter hashtag #TakeDownThatPost, but I don’t believe that removing the piece from their site, as if it never happened, was the right call. They should’ve left it up in full as a perpetual reminder of their awful decision.

By the way, the Internet Archive link the publishers mention only contains the first page of the piece, not the entire thing. (Did they know that or were they hoping no one would check?)

And why is it the Internet Archive’s responsibility to document Christianity Today‘s mistake, anyway?

When the sports website Grantland was called out for publishing a transphobic piece earlier this year, they left it up on the site but included a brief message right up front that linked to a guest post detailing all the problems with the article as well as a lengthy apology from site founder Bill Simmons that included this line:

We’re never taking the Dr. V piece down from Grantland partly because we want people to learn from our experience. We weren’t educated, we failed to ask the right questions, we made mistakes, and we’re going to learn from them.

That, I believe, was the right decision.

Again, the Christian publishers’ apology is a good start. But not giving future readers a chance to see for themselves what the article said, what the problems with it were, and how the editorial team decided to handle it, takes away a major educational opportunity for everybody.

Even though I know a lot of sexual abuse survivors themselves called for the essay to be taken down, scrubbing the piece from the site benefits Christianity Today more than anyone else.

If anyone has a PDF of the original article, please let me know.

***Update***: The original article, without edits, can be read here. Thanks to Secular Woman for the link.

June 13, 2014
In a Country Where Atheism is Equated with Terrorism, the Godless Are Growing in Number
Next Post

June 14, 2014 Exploring the Right Wing's Persecution Complex
"Gentlemen, we can rebuild him. We have the technology. We have the capability to make ..."
starskeptic Christian Mommy Blogger: Hit Your Kids ..."
"He preferred prostitutes."
BensNewLogin Christian Mommy Blogger: Hit Your Kids ..."
"That may be the key here. If you're very religious, then the crisis made you ..."
L'Homme Armé Survey: The Pandemic is Strengthening the ..."
"That's me! Evading back to the original subject every time!Why would pagans' including the Statue ..."
InDogITrust A Christian Wants Norway to Stop ..."
Browse Our Archives
What Are Your Thoughts?leave a comment