Tallahassee Atheist Calls on City Commission To Do Away with Invocation Prayers June 13, 2014 Hemant Mehta

Wednesday night, during a meeting of the Tallahassee (Florida) City Commission, atheist Peter Wood called on the elected officials to do away with their invocation prayers: 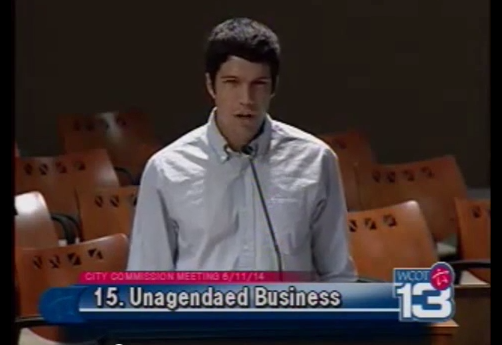 I’d like to bring an issue that has come to public view and, as far as I know, it hasn’t been addressed in Tallahassee, but if it has I just want to add my voice to the conversation.

Now I’d like to call for a separation of church and state in the city commission meetings of Tallahassee, to stop conducting invocation with a prayer to solely the Christian deity. Now, obviously, there’s a Greece-Galloway U.S. Supreme Court ruling in the month of May and many citizens have expressed concern over this issue, some more politely than others.

Now I’m not angry, I don’t want to start a fight, I’m not even offended by a few small words. But this issue is important to me and to a lot of other people that aren’t here today. Now I’m not asking for Buddha, or Allah, or the Flying Spaghetti Monster to instead become the preferred recipient of city-led prayer (although I do hope someday you are all lucky enough to be touched by His Benevolent Noodle).

What I’m asking this commission to do is to set precedent through either of two options: One: demonstrate full inclusion of belief systems by praying to all known gods and goddesses every invocation; this list would include, but is not limited to: Jesus, Yahweh, Zoroaster, Aphrodite, Neptune, the 1996 US Women’s gymnastics team, Lucifer, and Arnold from the Nickelodeon program Hey Arnold! Either adopt this practice or take a second route, which is to simply drop the issue and keep city hall separate from our private faiths, in adherence with the country’s founding principles.

You may say, as I already have, that these are just a few small words. Why cause such a fuss over just a few small words? While the words themselves are small, the privilege for a specific segment of society to have such language almost automatically instilled in public discourse is the kind of privilege that leads to a divided society. Is this one small change crucial? By itself, no, but as a larger reflection of who we are? Absolutely.

Prayer can be beautiful, but so can fairness. These states were founded as secular entities for a reason. The freedom of or from religion is a core tenet of the City of Tallahassee, the State of Florida, and the United States of America. I hope you take the chance to reaffirm to your constituents that this freedom is important to you as well.

Theism can be wonderfully powerful, moving people to help the poor, console the lonely, defend the weak. But like any system, it can be applied in a negative manner. When I think of church-state interaction I think of “In God We Trust” being implanted on currency so as to fear monger during the Cold War. When I think of church-state separation I think of an efficient, respectful, and respected public sector. The City of Tallahassee has an opportunity to demonstrate its central ambition: to serve the people of this remarkable city, as constituents and not as religious subjects.

Bonus points for including a reference to Hey Arnold!

There’s a brief conversation afterwards in which one of the commissioners reminds Wood that invocation participation is voluntary — which entirely misses the point. Wood respectfully pushes back, reminding them that he’s not challenging the legality of the prayers, only suggesting that the Commission has the option of doing something truly inclusive by doing away with the invocations altogether and making sure that different groups aren’t excluded at every meeting.

They don’t get it. They didn’t change their policy, but kudos to Peter for speaking out regardless. If more people challenged the practice altogether, maybe some of these elected officials would finally get a clue.

June 13, 2014
Superstition Marathon: The Soccer World Cup Has Kicked Off, So It's Peak Season for Irrationality
Next Post

June 13, 2014 Should Babies Be Considered Atheists? Depends on Your Definition of the Word
Browse Our Archives
What Are Your Thoughts?leave a comment