Should Babies Be Considered Atheists? Depends on Your Definition of the Word June 13, 2014 Hemant Mehta

Should Babies Be Considered Atheists? Depends on Your Definition of the Word

Once again, Richard Dawkins is being criticized for something he never meant — by someone who’s actually on the same side as him. 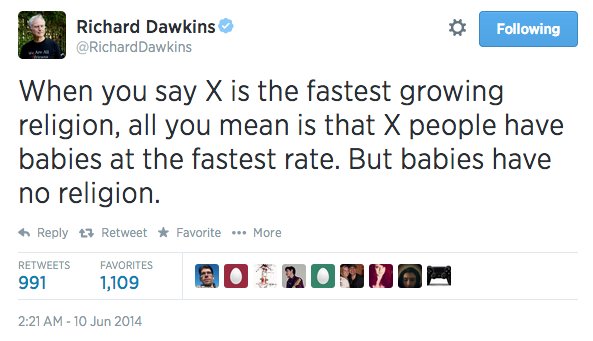 When you say X is the fastest growing religion, all you mean is that X people have babies at the fastest rate. But babies have no religion.

He’s absolutely right. Babies have no religion. That doesn’t mean they’re atheists in the same way the rest of us are — they’ve put no thought whatsoever into the matter. They’re non-religious in the same way they’re non-political. If you want to say they don’t believe in God, that’s literally true, yes, but virtually meaningless.

It’s like saying your cat’s an atheist. Your cat doesn’t profess a belief in God, but it’s not exactly saying the opposite either. It doesn’t mean atheists get to draw another tally mark on the big board.

So leave it to the Guardian‘s Andrew Brown to take Dawkins out of context. Just look at the headline and subtitle:

There’s no such thing as an atheist baby

Dawkins and Brown are actually in agreement… but Brown, for some reason, sees fit to complain about something Dawkins never actually meant.

Check out this awful analogy:

But there are no atheist babies, and certainly no agnostic ones. This is for two reasons. The first is that if we’re going to be consistent, and to demand that babies only be ascribed identities that they themselves embrace, there are no German, British or Chinese children either. There are simply the children of German and English and Chinese parents, who will in due course learn the habits and the rules of the cultures around them and grow into their parents’ language, nationality, food habits — and religious opinions.

That’s bullshit. There are German children and Chinese children — they’re born in those countries and have citizenship there. That’s not the same thing as a theological position which requires some thought. (It’s worth pointing out, though, that ethnicity isn’t the same thing. I call myself Indian for reasons that have nothing to do with my birthplace.)

Brown doesn’t need to criticize Dawkins on this. He just needs to clarify which definition of “atheist” he prefers.

June 13, 2014
Tallahassee Atheist Calls on City Commission To Do Away with Invocation Prayers
Next Post