In a Country Where Atheism is Equated with Terrorism, the Godless Are Growing in Number June 13, 2014 Hemant Mehta

In a Country Where Atheism is Equated with Terrorism, the Godless Are Growing in Number

In a country where a blogger was sentenced to 10 years in prison and 1,000 lashes (on top of a more than quarter-million-dollar fine) for “insulting Islam” and the government equates atheism with terrorism, godlessness is actually growing incredibly fast in Saudi Arabia. 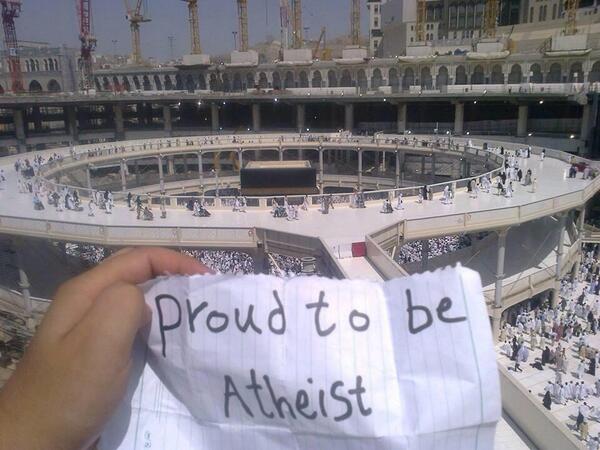 It’s in part due to a growing bitterness with the country’s theocracy, but the atheists dare not declare their beliefs publicly for obvious reasons:

But the greater willingness to privately admit to being atheist reflects a general disillusionment with religion and what one Saudi called “a growing notion” that religion is being misused by authorities to control the population. This disillusionment is seen in a number of ways, ranging from ignoring clerical pronouncements to challenging and even mocking religious leaders on social media.

Together, the appearance of atheists, a growing wariness of religious controls on society, as well as the continuing lure of jihad and ultraconservatism signal a breakdown in the conformity and consensus that has marked the Saudi religious field in the recent past. It is becoming a more heterogenous and polarized faith scene.

Indeed, if you look at the 2012 poll by WIN/Gallup International, 5% of Saudis polled were atheists — a percentage that was higher than the United States. (In our country, the demographic shifts favor the “Nones,” not atheists specifically.)

But with no safe way to express their views publicly, the underground atheists have no choice but to criticize faith and dogmatic thinking privately. The harder the government clamps down on the few who speak out, the more atheists they create.

June 13, 2014
Tecumseh School Board Debates Having Prayers at Meetings; Member Suggests Atheists Would Be Fine with Them
Next Post

June 14, 2014 Christian Publication Apologizes for Posting Pedophile's Essay, but Wrongly Removes Piece from Website
Browse Our Archives
What Are Your Thoughts?leave a comment