New Study: Americans Across the Political Spectrum Don’t Want Atheists to Marry Into Their Families

According to a major report released today by the Pew Research Center, political polarization in the American public is greater than ever before. (Surprise!)

Notably for this site, Pew asked respondents how they would feel if an immediate family member married someone who was either a born-again Christian or an atheist. 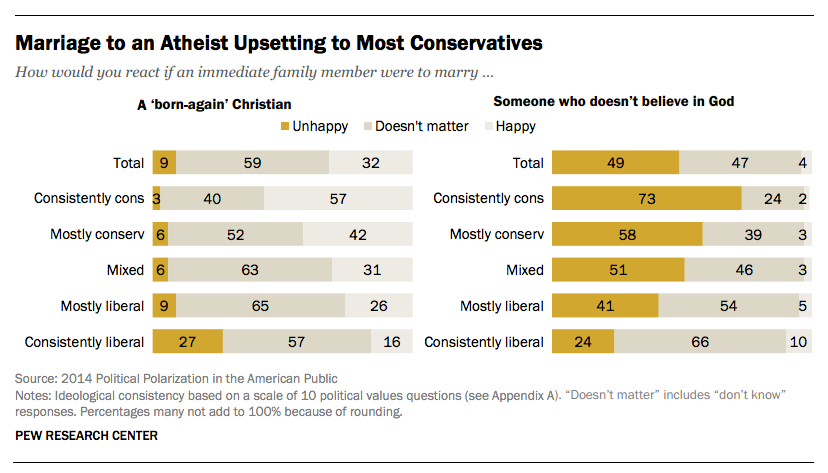 Only 27% of “consistently liberal” Americans said they would be upset if an immediate family member married a born-again Christian.

Meanwhile, an astonishing 73% of “consistently conservative” Americans said they would be upset if an immediate family member married an atheist.

You know what that means…

By the way, before we go blaming the right-wingers for their closed-mindedness, keep in mind that about a quarter of consistently liberal Americans said they’d be unhappy about an atheist marrying into the family, too. (Which makes you wonder who the hell these liberals want their loved ones to marry.)

In total, about half of all Americans would be disappointed if an atheist married into the family. Surprisingly, so would 10% of religiously unaffiliated Americans. We just can’t win. It’s like people think we’re untrustworthy or something…

If you’re looking for bright spot in those results, I suppose there’s an argument to be made that anti-atheist stereotypes can only be defeated when you get to know another atheist personally. And what better way to know an atheist than to see one at every family gathering?

June 12, 2014
This Shouldn't Be Controversial, but a Southern Baptist Pastor Supports His Gay Son
Next Post

June 12, 2014 Archdiocese of St. Louis Fights Back Against Accusations That a Priest Didn't Know Child Rape Was a Crime
Browse Our Archives
What Are Your Thoughts?leave a comment