Jesus, Full of Hot Air, Dons an Australian Jersey in Advance of the World Cup

In anticipation of the World Cup, Australian online gambling website Sportsbet released a hot air balloon this morning in Melbourne. The balloon was an imitation of Brazil’s Christ the Redeemer statue wearing an Australian soccer jersey: 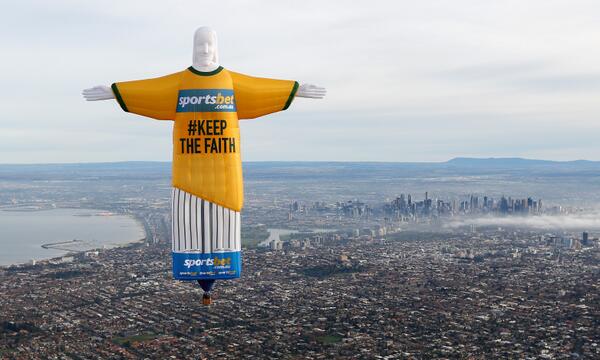 [Reverend Tim] Costello, the chair of the Australian Churches Gambling Taskforce, told Yahoo! Australia that the stunt was an overreach and against the principles Jesus stood.

“One of the great statues in Rio is Jesus, and Brazil is a Catholic nation that takes its faith seriously and its football fanatically,” Costello said.

“You don’t exploit those things that are sacred to people simply for your own advertising reach and I think that soccer as a world game should be sensitive to that and certainly express their disdain for these types of advertisements.”

Sportsbet responded to the criticism this way:

So our balloon supporting the #Socceroos is arrogant? Arrogance would have been putting the World Cup trophy in his hands #KeepTheFaith

This wasn’t about disrespect to Catholics. It wasn’t about theology, period. This was just a good-natured ribbing of the World Cup hosts (and a favorite to win it all) using one of the country’s iconic symbols. At this time of year, it’s arguable that soccer is much more of a religion than Catholicism, anyway.

It would have been even more entertaining if Sportsbet released multiple Jesuses (Jesii?) and let them duke it out in the air. (Or, better yet, release a Muhammad balloon and *really* cause a stir.)

Incidentally, Australian could play Brazil in the Round of 16.