Catholic Archbishop Tells Lawyer He Wasn’t Sure Whether Raping a Child Was a Crime Back in the 1970s June 10, 2014 Hemant Mehta

In 1984, Bishop Robert J. Carlson had to deal with the accusation that one of his priests, Father Tom Adamson, had sexually abused a boy for years during the 1970s (when the child was 14-16).

A few weeks ago, Carlson (now an Archbishop) gave a deposition about the incident and the most jaw-dropping exchange you’ll ever hear (p. 109) took place: 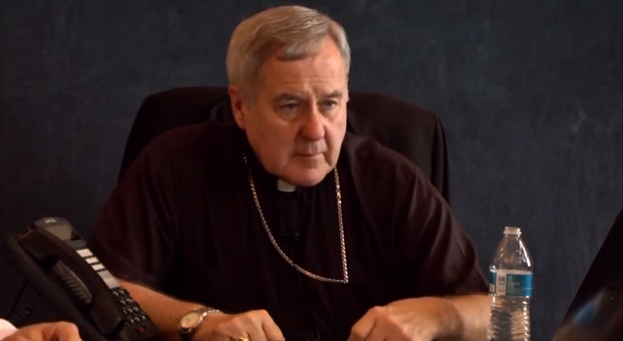 A. I’m not sure whether I knew it was a crime or not. I understand today it’s a crime.

Q. When did you first discern that it was a crime for an adult to engage in sex with a kid?

A. I don’t remember.

Q. When did you first discern that it was a crime for a priest to engage in sex with a kid who he had under his control?

A. I don’t remember that either.

Q. Do you have any doubt in your mind that you knew that in the ’70s?

Carlson couldn’t say on the record whether or not he knew the rape of a child was a crime back in the 1970s. Un-fucking-believable.

Look. If someone asks you whether you think it’s a crime for adults to have sex with children, the automatic, knee-jerk, non-NAMBLA response is “YES, OF COURSE IT’S A CRIME!” That’s the smart thing to do.

What most likely happened was that Carlson’s lawyers told him to admit as little as possible under questioning so that his words couldn’t be used against him in the future. But saying you were ever ignorant of the fact that child rape is a criminal act is taking that advice a little too far. (Even with certain exceptions in Minnesota, where this took place, a priest + 14-year-old boy = Always illegal.)

Carlson said some version of “I don’t remember” 193 times over the course of the deposition. Which is very convenient for someone who’s being asked to testify in a sexual abuse case that involves a fellow priest.

Tell me again why anyone would still want to be a member of the Catholic Church?

June 10, 2014 Today, Stand Up Against #TwitterTheocracy
Browse Our Archives
What Are Your Thoughts?leave a comment