Ann Widdecombe, a former Conservative Party politician in Britain, must be a Tea Party member in waiting given what she said in an interview this week: 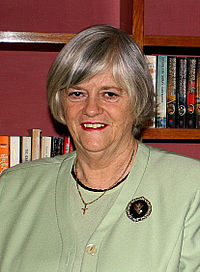 The ex-MP blamed “quite militant secularism” and equality legislation for people feeling they could not express their faith.

Ms Widdecombe, who converted from Anglicanism to Roman Catholicism in 1993, said: “Christians now have quite a lot of problems, whether it’s that you can’t display even very discreet small symbols of your faith at work, that you can’t say ‘God bless you’, you can’t offer to pray for somebody, if it’s an even bigger stance on conscience that you’re taking, some of the equality laws can actually bring you to the attention of the police themselves.

“So I think it is a very difficult country now, unlike when I was growing up, in which to be a Christian, an active Christian at any rate.”

Yes, it must be so hard having government-funded religious schools across the country and like-minded theists appointed to seats in Parliament… (They’re not all the same Christian denomination, but the point stands.)

But then Widdecombe took it a step further, arguing that Nazis and Communists have had it easier than followers of Jesus do today:

“In the 1950s when plenty of people had lost lives and limbs and loved ones to the Nazis, it was still possible to be a Nazi in this country.

“When we were engaged in the height of the Cold War, when there were all those weapons lined up on the borders of the Warsaw Pact countries pointing straight at us, you could still, in this country, proclaim yourself as a Communist, you could still stand for Parliament for that matter as a Communist.

Look, freedom of speech is still alive and well. Christians aren’t persecuted in Britain any more than they are in the United States.

The issue isn’t that Christians can’t admit their Christianity anymore. It’s that the rest of us no longer have to take them seriously when they do it. Their beliefs no longer get undeserved respect. They don’t get bonus points for believing in a higher power.

That’s not persecution. That’s just being unpopular. It’s not the same thing.

June 9, 2014
Science Is a Way to Keep from Fooling Ourselves... and Each Other
Next Post

June 9, 2014 How Does This Evangelical Scientist Convince Christians to Accept Climate Change?
Browse Our Archives
What Are Your Thoughts?leave a comment