Calgary Billboard: “The Sun is the Main Driver of Climate Change. Not You. Not CO2.” June 8, 2014 Hemant Mehta

Calgary Billboard: “The Sun is the Main Driver of Climate Change. Not You. Not CO2.”

A new billboard in Calgary falsely claims: “The sun is the main driver of climate change. Not you. Not CO2.” 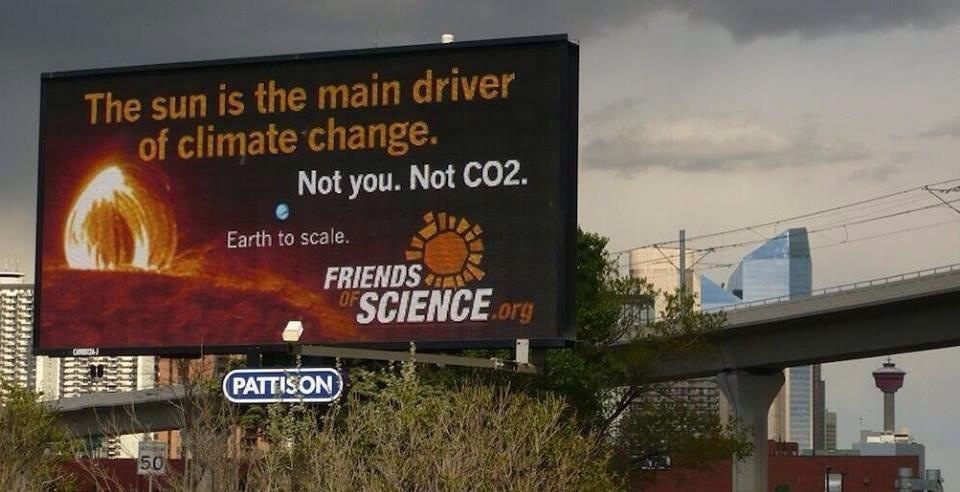 1) The group funding the billboard is FriendsOfScience.org, a groups as misnamed as Americans For Truth About Homosexuality (which spreads lies about homosexuality) and all those Christian groups with “family” in their names that oppose gay families.

2) Pattison Outdoor Advertising allowed this billboard to go up. It’s the same company that rejected ads from Greenpeace (promoting solar power) and the two ads below from the Centre For Inquiry (promoting Humanism):

But while we’re at it, yes, human-induced climate change is real and, no, the sun isn’t the problem. If anything, the sun and climate have been moving in opposite directions over the past couple of decades. The vast majority of climate scientists will tell you the issue isn’t the sun, it’s the amount of greenhouse gases we’re emitting. (As one online commenter said, the billboard’s message is akin to blaming trees for forest fires.)

Friends of Science, by the way, has received significant funding from the oil industry. With friends like those, who needs enemies?

(Thanks to Helen for the link)

June 8, 2014
Even at a "Spiritual Hot Spot," How Did a CNN Reporter Fall for a Cold Reading?
Next Post

June 8, 2014 In Most Major Cities, Tonight's Cosmos Will Feature Pro-Atheism Commercial Starring Ron Reagan
Browse Our Archives
What Are Your Thoughts?leave a comment