Yesterday, Judge Barbara Crabb‘s ruling overturned a gay marriage ban in Wisconsin, much to the chagrin of bigots everywhere.

Because my review of that law convinces me that plaintiffs are entitled to the same treatment as any heterosexual couple, I conclude that the Wisconsin laws banning marriage between same-sex couples are unconstitutional.

It was another wonderfully-written rebuke to the typical arguments made by the Christian Right, much in the same vein as Judge John E. Jones III did in Pennsylvania.

And, also like Jones, Crabb (below) deserves recognition for her important decisions regarding church/state separation. 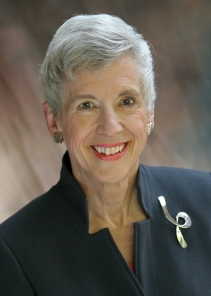 In 2010, Crabb ruled that the National Day of Prayer was unconstitutional:

It goes beyond mere “acknowledgment” of religion because its sole purpose is to encourage all citizens to engage in prayer, an inherently religious exercise that serves no secular function in this context. In this instance, the government has taken sides on a matter that must be left to individual conscience. “When the government associates one set of religious beliefs with the state and identifies nonadherents as outsiders, it encroaches upon the individual’s decision about whether and how to worship.” [quoting from McCreary County decision.]

One might argue that the National Day of Prayer does not violate the establishment clause because it does not endorse any one religion. Unfortunately, that does not cure the problem. Although adherents of many religions “turn to God in prayer,” not all of them do… Further, the statute seems to contemplate a specifically Christian form of prayer with its reference to “churches” but no other places of worship and the limitation in the 1952 version of the statute that the National Day of Prayer may not be on a Sunday.

Last year, in a ruling with even bigger implications, Crabb ruled that the “parish exemption” that allows ministers to deduct the cost of rent for their church-owned houses from their taxable income was also unconstitutional because it showed preferential treatment for religious leaders.

That case is still working its way through the appeals process.

Needless to say, Crabb is a hero to me and, I’m sure, many of you. She understands that the First Amendment allows for free expression of religion, but it cannot be used to promote religion in any form. And she’s not afraid of breaking longstanding tradition if that tradition has been wrong this whole time.

She’s done it with the National Day of Prayer and religious housing exemptions, and she did it again yesterday by striking down the unnecessary and illegal ban on gay marriage. If only there were more judges like her.

June 7, 2014
Christian-themed Park Will No Longer Be Getting a $140,000 Boost from Iowan Taxpayers
Next Post