When myths and superstitions take hold in impressionable minds, the results are sometimes deadly. Even brand new myths have that potential.

Case in point: Morgan Geyser and Anissa Weier, two 12-year-olds from Wisconsin who, on Saturday, stabbed a friend multiple times “to please a mythological creature they learned about online,” according to the AP story. 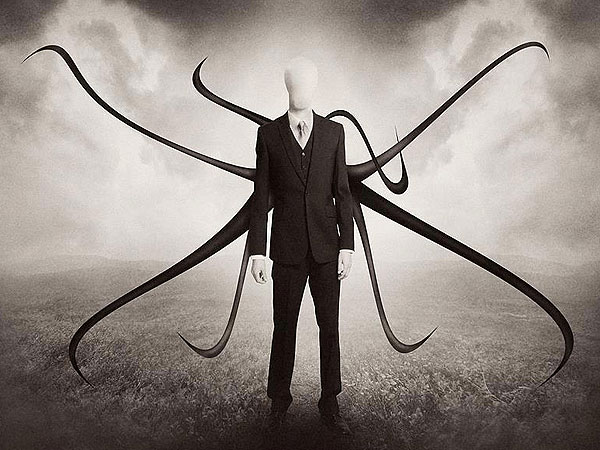 The young victim of the knife attack, despite 19 stab wounds, is said to be in stable condition and is expected to survive.

One of the girls told a detective they were trying to become “proxies” of Slender Man, a mythological demon-like character they learned about on creepypasta.wikia.com, a website about horror stories and legends. They planned to run away to the demon’s forest mansion after the slaying. …

Slender Man … would accept them and let them live with him in his mansion in the Nicolet National Forest. [One] girl said she sees Slender Man in her dreams. She said he watches her and can read her mind and teleport.

Ah — just like the mindreading, all-seeing, omnipresent, serial-killing Christian God? (Who is totally real, natch, and made of pure love and fluffy puppies, unlike the scary-silly Slender Man monster.)

The Slender Man myth is just five years young, having been created in 2009 by a user of the web forum Something Awful, Eric Knudsen, a.k.a. Victor Surge. Knudsen envisioned “a thin, unnaturally tall man with a blank and usually featureless face, wearing a black suit.” Wikipedia says that

Stories of the Slender Man commonly feature him stalking, abducting, or traumatizing people, particularly children. The Slender Man is not confined to a single narrative, but appears in many disparate works of fiction, mostly composed online.

Some Christians (understandably) want nothing to do with the deadly-legends angle, perhaps sensing that that’s a little too close for comfort. In fact, one commenter on the People website remarked of the two alleged wannabe killers:

If they went to church and learned some love in the family they would not have done these things!

‘Cause God-believers just don’t pull that shit, you know.