Jordan Balderas just graduated from high school, and he spent his senior year trying to start a group for atheists and Agnostics at his school called “Youth for Truth.” (The name, he says, suggests that they’re searching for truth, not that they alone possess it.)

He was successful… but, in a talk for a TEDxYouth event, Jordan spoke about all the hoops he had to jump through to make that group a reality: 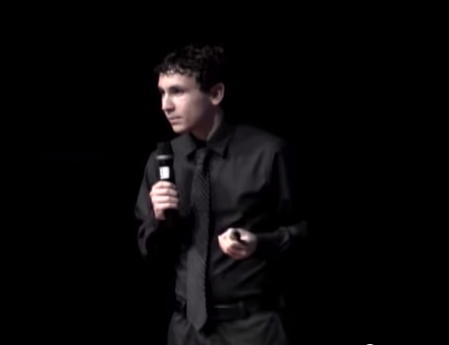 Right off the bat, I was amazed that he approached 13 teachers to be the faculty sponsor for the group and they all told him the same thing: “It’s too controversial.” They didn’t want to deal with the inevitable backlash.

Jordan also talked about how his school asked him to remove the word “atheist” from his flyers because it might have rubbed people the wrong way.

Those harmless flyers were still torn down and vandalized.

In my experience, Jordan’s story isn’t unique. So many secular students across the country have gone through similar ordeals — obstacles Christian students rarely, if ever, see when forming Bible studies.

I asked Jordan if the group will still be around next year now that he’s graduated and he told me it would be: With multiple students holding officer positions, no less! He also plans to start up another group in college. Hopefully, it’ll be less complicated the second time around.

June 5, 2014
If This Texas County Installs a Ten Commandments Monument at the Courthouse, a Satanic One Could Follow
Next Post