In April, James Woods announced that he would be running for Congress in Arizona’s District 5, hoping to replace Republican Matt Salmon. (Salmon opposes federal funding of abortions, gay marriage, and gay adoption, despite his own son being gay. He even voted against reauthorizing the Violence Against Women Act.)

It’s worth pointing out that Woods, who is legally blind, is also openly non-religious.

In an ad just released by his campaign, Woods lays out his five guiding principles and brilliantly urges voters to help “restore America’s vision“: 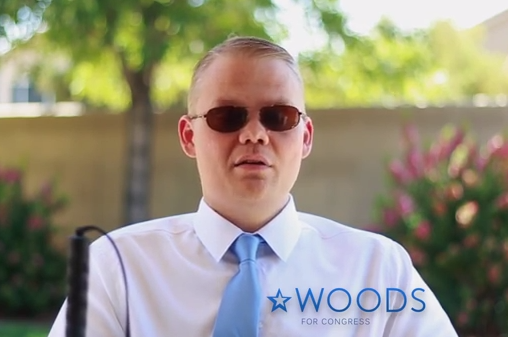 If you’d like to support his campaign, consider donating to the efforts. As I’ve written before, Woods has an uphill battle in a very red district, but his very candidacy is one we should root for, not just because he doesn’t believe in God, but because he represents the values that so many of us cherish.

June 4, 2014
My Book About Young Atheists Was Handed Out at Kentucky High Schools Yesterday
Next Post