After Son Comes Out, Baptist Pastor Tells Church He’s No Longer Anti-Gay… and Gets a Surprising Vote of Confidence June 3, 2014 Hemant Mehta

After Son Comes Out, Baptist Pastor Tells Church He’s No Longer Anti-Gay… and Gets a Surprising Vote of Confidence

Danny Cortez, the pastor at New Heart Community Church in La Mirada, California, did something very unusual for a Southern Baptist Church earlier this year: He told his congregation that he no longer accepted the church’s teachings on homosexuality: 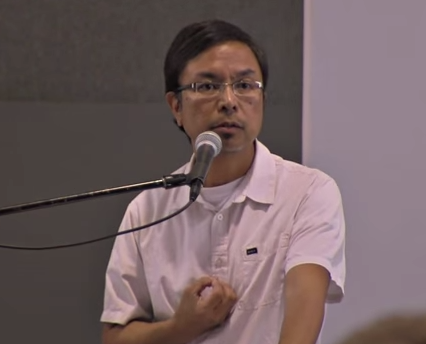 It’s a beautiful sermon, really, with passages that could even move atheists to tears.

Buoyed by his own son’s admission that he was gay, Cortez told his church that he knew not everyone would agree with him but he had to say something:

… I expressed that my goal wasn’t about trying to convince everyone what I believe, but that we should allow room for grace in the midst of disagreement. I shared that the body of Christ is segregated every sunday between gay affirming and non-gay affirming and that there must be unity and love.

And then the church’s elders did exactly what you’d expect: They decided to take a vote on whether or not to allow Cortez to keep his job.

Here’s the shocker: Last month, the congregation voted to keep him. They even revised their church’s own official stance on homosexuality, allowing members to hold LGBT-affirming perspectives. Cortez wrote:

The church just voted two Sundays ago, on May 18, 2014, to not dismiss me, and to instead become a Third Way church… This is a huge step for a Southern Baptist Church!!

It’s not controversial for us, but it’s a huge step for them. Those who disagree with the decision and want to continue being surrounded by bigots will be parting ways next weekend — and good riddance.

Coincidentally or not, the annual meeting of the Southern Baptist Convention also takes place this weekend, and you can bet Cortez’s story will be a major topic of discussion. Albert Mohler, president of Southern Baptist Theological Seminary, has already dismissed Cortez and his church:

… there is no third way. A church will either believe and teach that same-sex behaviors and relationships are sinful, or it will affirm them. Eventually, every congregation in America will make a public declaration of its position on this issue. It is just a matter of time (and for most churches, not much time) before every congregation in the nation faces this test.

It’s worth noting that the Southern Baptists are losing the younger generation, I believe, precisely because of their hardline stance on this issue.

Cortez is just a symbol of what’s to come. Denominations that have long been against equal rights will start to come around, one pastor at a time, until they have no choice but to come around on the issue or risk being left in the dust.

(Thanks to Jan for the link)

June 3, 2014 I'm a Student at Lebanon High School and I Thought My Principal's Religious Graduation Speech Was Distasteful
Browse Our Archives
What Are Your Thoughts?leave a comment